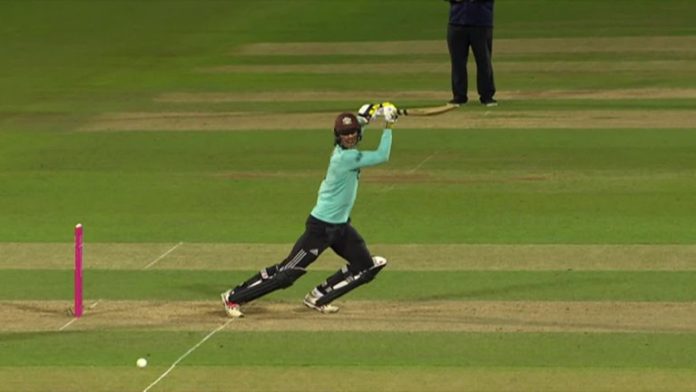 Ben Foakes and Jamie Smith put together an unbroken 93-run stand as Surrey beat London rivals Middlesex by six wickets in an unexpectedly low-scoring affair at the Kia Oval.

The result sees the home side go second in the Vitality Blast’s South Group.

Foakes made 60 not out and Smith an unbeaten 38 in an assured fifth-wicket partnership to steer Surrey past Middlesex’s 113-9 with 11 balls to spare.

Earlier in the day, Kent’s batsmen had pummelled 192-6 on the same pitch in a victory against Essex which saw 355 runs scored, but under lights the second part of a double-header was for long periods a totally different spectacle.

On a sluggish pitch taking spin, Middlesex struggled badly against Surrey’s trio of slow bowlers but, when Surrey replied, they were also soon 23-4 as paceman Steven Finn removed Will Jacks and Laurie Evans in his first two overs and leg-spinner Nathan Sowter then sent back Hashim Amla and Rory Burns in a dramatic fifth over.

Foakes, however, hit eight fours in a 50-ball knock full of quality strokes on both sides of the wicket, and 20-year-old Smith was almost as good with four boundaries in his 35-ball effort.

At halfway, Surrey still had a bit to do at 55-4 but Foakes and Smith were more than equal to the challenge in a controlled exhibition of batting under pressure.

Earlier Gareth Batty, Surrey’s 42-year-old captain, picked up 3-18 with his off-spin, while Jacks took two for 16 and did not concede a single boundary in his four overs of off-breaks.

Slow left-armer Dan Moriarty was wicketless but bowled tidily, as did left-arm seamer Reece Topley with 1-21, while 22-year-old fast bowler Gus Atkinson was also impressive with 2-18 from three overs.

Middlesex, after choosing to bat, got off to a poor start with Stephen Eskinazi bowled for two by Jacks.

Martin Andersson straight drove Atkinson’s first ball for four but then played all round the seamer’s second and was bowled for seven.

Only a wild first over by Jamie Overton, costing 14 and in which Max Holden carved a no ball full toss for four, helped Middlesex get to 39-2 by the end of the powerplay.

Left-hander Holden, having reached a run-a-ball 29, chopped on against Jacks and Batty’s introduction for the 11th over suddenly left Middlesex in real trouble at 63 for five as debutant Jack Davies mishit a reverse sweep to point to go for 16 and James Harris was leg-before for two.

Worse was to follow in Batty’s second over when Dan Lincoln pulled a short ball to deep midwicket and from 75-6 Middlesex limped into three figures as catches in the deep, off Topley and Atkinson respectively, undid both John Simpson and Luke Hollman.

Sowter was run out for three in the final over.

Sowter’s evening did get better later when former South Africa star Amla chipped a return catch to him off a leading edge and Burns was leg-before without scoring two balls later.

Finn hit Jacks with a painful blow on the hand prior to getting him caught at mid-on for four, then foxed Evans with a slower ball.

Foakes and Smith then took over, though, with Sowter finishing with 2-16 and Finn 2-21.