Home Sport Medvedev cruises into fourth round of US Open 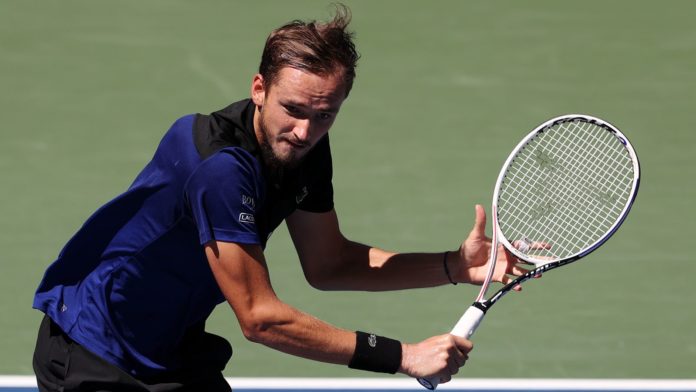 Last year’s finalist has not lost more than four games in a set, he faces Frances Tiafoe or Marton Fucsovics in the fourth round

Third seed Daniil Medvedev continued his cruise through the US Open draw in New York on Saturday with another straight-sets victory.

The Russian’s run to the final last year was full of drama but so far he has not lost more than four games in any set across three matches.

On the Arthur Ashe Stadium, Medvedev was in control from start to finish as he beat the American JJ Wolf, 6-3 6-3 6-2 to reach the fourth round.

“It’s good that I managed to win in three sets,” Medvedev said on court after his victory.

“Six months of not playing tennis, it’s not easy to recover from four and five-set matches. With a day off and just a three-setter, I feel good.”

Medvedev will next face either another American, Frances Tiafoe, or Marton Fucsovics of Hungary in the next round.

Tenth seed Andrey Rublev has been nearly as impressive as his fellow Russian and he needed just an hour and 24 minutes to defeat Italian Salvatore Caruso 6-0 6-4 6-0.

The unseeded Canadian Vasek Pospisil pulled off a second upset of the week as he knocked out Spain’s eighth seed Roberto Bautista Agut 7-5 2-6 4-6 6-3 6-2.

Pospisil, who eliminated fellow Canadian and 25th seed Milos Raonic in the second round, smashed 71 winners and 19 aces during the encounter.

The 30-year-old has set up a fourth-round encounter with Alex de Minaur who was also involved in a marathon match.

De Minaur will be focused on cleaning up his output before he meets Pospisil though, after hitting 50 unforced errors to his 42 winners.