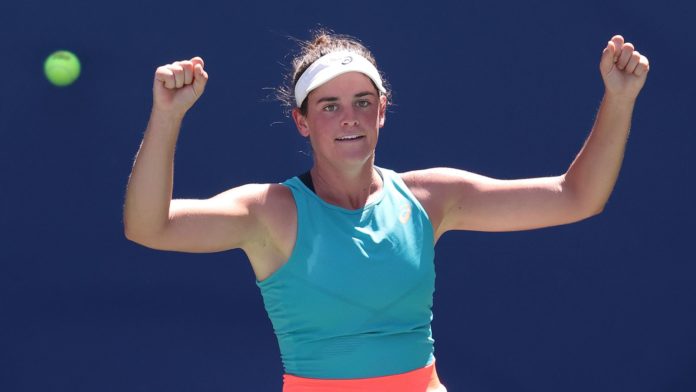 Jennifer Brady swatted aside former US Open champion Angelique Kerber 6-1 6-4 to reach the quarter-finals of a Grand Slam for the first time.

The 25-year-old American enjoyed a fine start to the year and has kept that going following the resumption of the tour, winning her first WTA title in Lexington last month.

From the outset, Brady bullied her German opponent from the back of the court and the first set took just 22 minutes.

The second was closer, and there was concern for Brady when she went off after five games and returned with her left thigh strapped.

The 28th seed needed more treatment at the change of ends, but held things together mentally and physically to march across the finish line.

“Wow, it feels great, I’m so happy. I played a spectacular first set,” Brady said, straight after her victory.

“The second set I really just tried to focus on every single point. I was getting a little frustrated, I felt a little pain in my leg, but I just really wanted to close it out in two sets.”

Brady, who lost her previous fourth-round appearances at majors, has yet to drop a set in New York and has lost just 19 games in her four matches.

She is one of four American women who remain in the singles draw and will face the 23rd seed Yulia Putintseva in the quarter-finals.

Putintseva came through a topsy-turvy 6-3 2-6 6-4 encounter inside the Arthur Ashe Stadium against the eighth seed Petra Martic.

The two were facing each other for the first time in their careers and Putintseva surged into a 5-0 lead in just 19 minutes, en route to taking the opening set.

However, Martic appeared to have turned the match in her favour by easing through the second.

With Putintseva needing treatment on her back during the second, it appeared that Martic was going to be the one to reach the last eight. Instead, it was the 23rd seed who composed herself and romped into a 5-1 lead.

At the point nerves crept in, Martic clawed back three games and then gave her opponent plenty of time to think about the task at hand, by taking an injury timeout of her own.

Putintseva held herself together well though, and let out a huge roar when her victory was confirmed.

“I’m very happy and excited. I was so excited to step out onto this big court,” she said of her first match on the main court at Flushing Meadows.

“Without fans, it wasn’t so stressful! So, that helped me to take it easy. It means a lot to me [to win] right now, I’m very happy.”