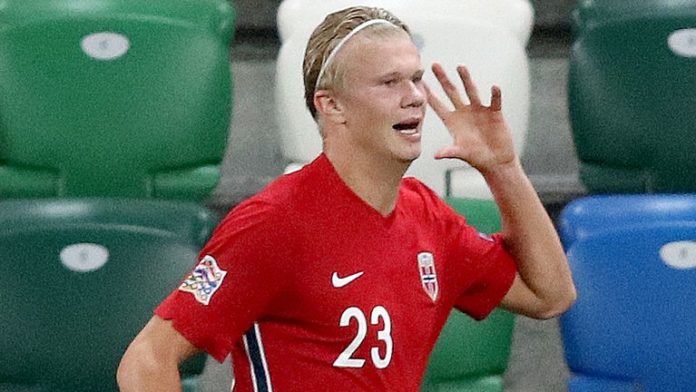 Lionel Messi and Cristiano Ronaldo before the match, Zlatan Ibrahimovic and Henrik Larsson afterwards. The comparisons keep stacking up for Erling Haaland.

The Borussia Dortmund striker made it 19 goals in 20 games this calendar year when scoring twice in Norway’s 5-1 win in Northern Ireland on Monday night.

The first was a sublime side-footed finish from the edge of the area, the second a clinical first-time effort which curled beyond a helpless Bailey Peacock-Farrell.

Before the match Norway coach Lars Lagerback had said Haaland has the potential to be as good as Messi and Ronaldo.

“I’ve maybe been around too long but I have never seen a guy since maybe (Lionel) Messi or (Cristiano) Ronaldo that developed at such a young age,” Lagerback said. “That’s very unique and he has all the possibilities to become a really world class player.”

And after witnessing Haaland’s prolificacy in front of goal once more at Windsor Park, Lagerback added Swedish strikers Larsson and Ibrahimovic to the list.

“I don’t mean to compare him with players, but he is a little bit of a mix of players I had before like Henrik Larsson and Zlatan Ibrahimovic,” said Lagerback, who was the Sweden manager from 2000 to 2009.

“Zlatan was the same, he always wanted to go for it and score goals. Henrik was a bit more of a team player and moving a lot.

“He’s a little bit of a combination. He has the gift and the mentality. If we keep his feet on the ground he can reach really high.”

Following his double in Belfast, Haaland was humbled by those lofty comparisons made by his coach.

“Woah, that’s some huge words,” he said. “I appreciate these words.

“First of all I want to try to get as best as I can, to work hard every day, to try to enjoy my life as much as possible. You saw tonight I enjoyed the game. That’s why I play football.”

Having joined Dortmund from RB Salzburg earlier this year the 20-year-old is not thinking about his next move, but the Leeds-born forward remains open to a Premier League move in the future.

He is also keen to watch Leeds’ Premier League return at Liverpool, live on Sky Sports on Saturday, which comes 16 years on from their last top-tier match and 20 years since his father, Alf-Inge Haaland, turned out for the Yorkshire club.

“First of all I’m very happy in Bundesliga,” he added. “But you never know what happens in the future. I like to watch the Premier League so I’ll probably watch that game, yeah.”