Home World An Air Force One that flies at five times the speed of... 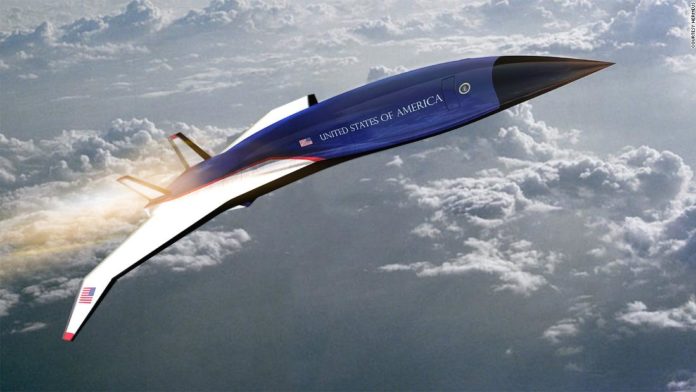 (CNN) — There could be a supersonic Air Force One prototype airplane as early as 2025, with the US Air Force getting busy awarding development contracts.

California start-up Exosonic is working on a low-boom supersonic Mach 1.8 twinjet which caught the eye of the US Air Force’s Presidential and Executive Airlift Directorate (PE).

It was announced last week that Exosonic has been issued a contract to develop supersonic executive transport that could be used as Air Force One.

That’s on top of the news last month that Atlanta-based Hermeus Corporation, which is working on a hypersonic 20-seater that promised to deliver passengers from New York to London in 90 minutes, has received investment from the same directorate.

Hermeus is partnering with the US Air Force and PE to develop its Mach 5 craft, pictured at the top of the article, in order to support the presidential and executive fleet.

CNN reported last year that, after more than five decades and 11 administrations, President Donald Trump was planning to give the livery of the presidential Air Force One plane a patriotic-themed makeover.
Now the United States administration behind Space Force is taking an equally ambitious approach to its top-league transport.

The Exosonic’s 70-seater boasts a 5,000-nautical-mile range and, thanks to boom-softening techniques, it should be able to fly overland at almost twice the speed of sound without upsetting residents down below.

“Low boom allows travelers to fly at supersonic speeds without generating disruptive booms for those on the ground.”

So what kind of speeds are we talking? Well, Mach 1.8 is around 1,381 miles per hour (2,222 kilometers) and so Exosonic’s craft promises to halve cruise times compared to existing aircraft.

Exosonic will also be working with the US Air Force to modify the aircraft cabin so it has the necessary communications equipment security measures, and the kind of classy fittings that will allow US leaders and their guests to work and rest on board.

A US Air Force One supersonic prototype could be rolled out by 2025, reports Military.com.

Exosonic co-found and CEO Norris Tie confirmed to CNN that the company expects its supersonic plane to be flying by the mid-2030s.

CNN Travel reported on Hermeus in 2019, when the aerospace company was attracting attention for its plans to develop a craft twice as fast as Concorde, the supersonic plane that made its final transatlantic flight in October 2003 and traveled between New York and London in under four hours.

Hypersonic travel is generally regarded as reaching speeds of Mach 5 or above, or five times the speed of sound. Hermeus successfully tested a Mach 5 engine prototype in February this year, having designed it from scratch.

“At Hermeus, we are looking to build high-speed aircraft faster and cheaper than has ever been done,” Skyler Shuford, Hermeus co-founder and chief operating officer, tells CNN Travel. “We built a Mach 5 engine prototype in only nine months and for less than two million dollars.”

The Hermeus founders include former employees from SpaceX, Elon Musk’s rocket start-up, and Blue Origin, Jeff Bezos’ secretive space venture. All four founders worked together at Generation Orbit, where they worked on the development of a hypersonic rocket-plane and the US Air Force’s newest X-Plane.

That Hermeus Mach 5 engine firing up.

While the contracts are a big leap forward for Exosonic and Hermeus, Paul Bruce, senior lecturer in the Aeronautics Department at Imperial College London, sounded a note of caution when CNN spoke to him about the Hermeus project in 2019.

“The biggest challenge for hypersonic flight is propulsion,” he said. “We’ve sent small vehicles up and flown them hypersonically using scramjets, an advance type of jet engine. This is quite experimental and we’ve got a long way to go before we see these on a passenger aircraft.

“There are many other difficulties with flying that quickly routinely — we do have the engineering capabilities to do it.

“The bigger issue is the financial and perhaps the environmental issue; flying that fast will burn an awful lot of fuel, and will be much more inefficient than flying slowly. But if there is a market for it, I don’t have any doubt that we could build one of these types of planes.”

Music mogul and entrepreneur Kanye West famously pitched the Apple-backed iPlane-1 to Donald Trump in 2018, as a hydrogen-powered alternative to the current Air Force One.

As a 2020 US presidential candidate, he might well be watching developments with interest, although as CNN reported this week, he has only made the ballot in 10 states, making it mathematically impossible for him to become the next president.

“While a potential Mach 5 Air Force One is very interesting (and awesome) to us, we are laser-focused on supporting the Presidential and Executive Airlift Directorate by integrating and demonstrating their needs with our first aircraft over the next few years,” says Schuford.

“For us, it’s not just about making a fast plane; we aim to firmly anchor the US as a leader in high-speed flight.”

Amy Woodyatt contributed to this report