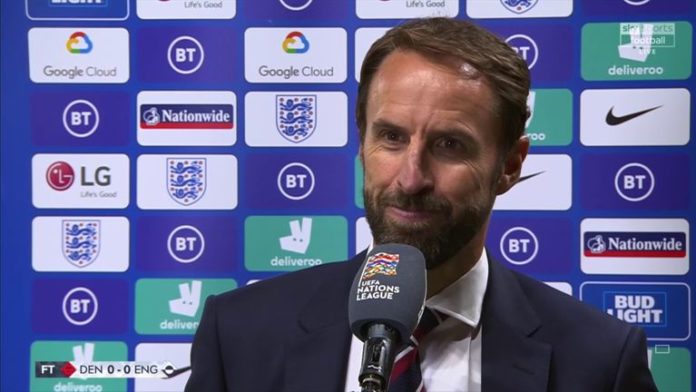 Gareth Southgate has defended the use of his 3-4-3 formation as his under-strength England side toiled to a 0-0 draw in Denmark.

The Three Lions were held to an uninspiring Nations League stalemate at the Parken Stadium on Tuesday as Southgate’s side concluded a troubled international break.

England were without Mason Greenwood and Phil Foden, who returned home following Saturday’s win in Iceland after breaking COVID restrictions.

“We have learned a lot,” Southgate told Sky Sports. “We tried a new system which we will get better at given everything we have had to deal with – 10 pull-outs for various reasons.

“So we felt we wanted to start with stability – we could have probably been a bit higher with attacking threat in the first-half but we were in control and given the stage of the season the players are at that was really important.

“It wasn’t a game where we were going to be able to press high for 90 minutes so physically that had a bearing on the formation we played as well.

“We need to think about how we can develop the system against some of the higher quality teams because against the lower nations that we’ve played, the 4-3-3 works very well. You lose a bit of the attacking threat in terms of the No 8s that we play but we look very solid defensively which is a great platform to build on.

“The options that we had to play a 4-3-3 tonight weren’t going to get through the 90 minutes and this was the best way to refresh the team but also to look at something different.

“Second-half we started to accelerate the game with some of the changes where we felt we were in control. Putting Mason [Mount] into midfield made us more forward-thinking and Jack [Grealish] did the same.

“Ainsley [Maitland-Niles] I thought did really well so I was very pleased with the players who made their debuts, I thought Conor Coady was excellent and Eric Dier has had two excellent games at centre-back for us so the back three today was very solid.”

England had greater midfield balance when Mason Mount was introduced for Jadon Sancho on the hour-mark, and Southgate admitted it took a while for Kalvin Phillips and Declan Rice to settle as a central pairing.

The move was made to inject some urgency, and nearly paid dividends when Mount set up Kieran Trippier for an inviting cross that was headed over by Kane.

England continued to seek the breakthrough with the more forward-thinking Jack Grealish brought on, but the lack of naturally left-footed players in the side slowed down the attacks as Denmark kept the visitors at bay.

Southgate, however, does not believe the stalemate was a result of playing right-footed players out of position.

When asked about the lack of a naturally left-footed option, the England boss responded: “Where is that player? I keep hearing that argument but I think Kieran has had two excellent games for us.

“Of course, a left-sided player gives you that balance but Ben Chilwell and Luke Shaw are injured while Danny Rose isn’t really involved at Spurs at the moment.

“We adapted in the best way we could. I think the whole group has shown amazing resilience as we had numerous injuries and numerous positive [coronavirus] tests. We had a lot of players who have been in quarantine and players short of training minutes and match minutes so we knew it would be incredibly difficult to piece it all together.

“But we’re in a position where we can go back to Wembley and the group is in our hands.”

England host Wales in an international friendly on October 8 at 8pm before taking on Belgium at Wembley in the Nations League on October 11 (kick-off is at 5pm).

Gareth Southgate’s men then host Denmark at 7.45pm on Wednesday October 14. The Danes will face the Faroe Islands on October 7 in a friendly and Iceland in the Nations League on October 11 before their trip to London.

Actress Elizabeth Banks on “My Body, My Podcast,” empowering women in...

Thousands took to the streets in Cuba, now many are facing...