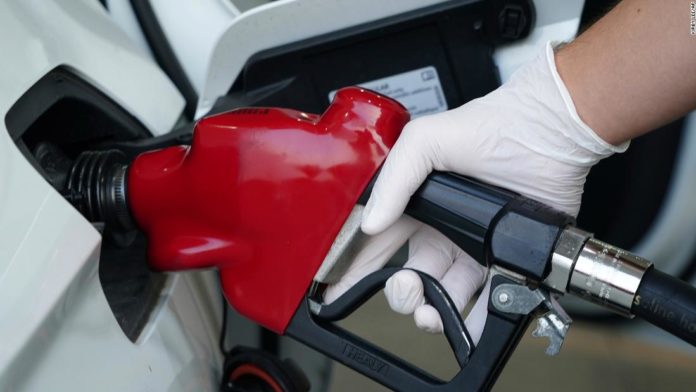 US oil prices plunged 7% Tuesday to $36.76 a barrel. It was crude’s worst day and lowest closing price in nearly three months. At one point, oil was down as much as 9%. Brent crude, the world benchmark, fell below $40 a barrel for the first time since late June.
The fierce selling in the energy market is being driven largely by rising concern about how much crude the fragile world economy needs. With Labor Day in the rearview mirror, summer driving season in the United States is over. Jet fuel demand remains extremely weak because many people don’t want to fly during the pandemic. And no one knows for sure how long it will take to recover.
“Demand is down. Supply is up,” said Robert Yawger, director of energy futures at Mizuho Securities. “The economic laws of survival are being violated on both ends of the spectrum.”
The selloff comes after Saudi Arabia, the de facto leader of OPEC, slashed its official selling price to Asia and the United States, Bloomberg News reported. It’s never a good sign when the world’s leading oil exporter feels compelled to cut prices to draw buyers.
“That is a double-blinking warning sign,” said Yawger. “OPEC kind of panicked today by putting out a bad signal to the energy community.”

The latest turmoil in the oil market comes during major turbulence in the stock market.
The Nasdaq plunged Tuesday for the third day in a row and is flirting with a 10% correction from record highs. Major pandemic winners like Tesla (TSLA), Apple (AAPL) and Zoom (ZM) are down much more.
“Oil is getting caught up in the risk-off trade,” said Jeff Wyll, energy analyst at Neuberger Berman. He added that “nothing changed” in the fundamental supply/demand picture for oil to “warrant this kind of drop.”
Just as investors are hitting the exits on tech stocks, they are unwinding speculative bets on crude oil.
“Everyone is trying to get out at once. There is an avalanche of sell orders,” said Mizuho’s Yawger.
Investors are also rushing out of oil stocks.
Apache (APA), Occidental Petroleum (OXY) and Diamondback Energy (FANG) all tumbled more than 6% on Tuesday. ExxonMobil (XOM), which last month was kicked out of the Dow, retreated another 3%.

The pandemic, along with a price war between Russia and Saudi Arabia, caused oil prices to implode this spring. US oil prices even briefly turned negative for the first time ever, bottoming at -$40 a barrel.
But unprecedented production cuts from OPEC and Russia helped trigger a V-shaped recovery in the energy market. Just seven weeks after bottoming, US crude returned to $40 a barrel. That led OPEC and Russia to agree to slowly increase production from very low levels.
The good news for oil bulls is that demand for gasoline has rebounded sharply.
Road traffic is has nearly recovered and Bank of America expects global oil demand from road use to go positive year-over-year in the next few months. That has helped lift national average gasoline prices to $2.22 a gallon, up from a low of $1.77 in late April.
The bad news is that air travel is nowhere near pre-COVID levels — and that’s keeping demand for jet fuel very depressed. As the CNN Business Recovery Tracker shows, just 940,000 people were processed through TSA security lines on Monday, down 59% from a year ago.
Business travel likely won’t recover until there is widespread access to a coronavirus vaccine, United Airlines (UAL) Chairman Oscar Munoz recently told CNN Business.
That’s why Bank of America warned in a report late last week that it will take three years for global oil demand to “normalize.”
“Oil demand globally is really sluggish. All of the low hanging fruit from the global oil recovery has already happened,” said Michael Tran, managing director of global energy strategy at RBC Capital Markets.

When will crude bottom?

Tran warned that the fundamentals in the oil market will likely “continue to be weak through the fall.”
So how much lower can crude go?
Even at Tuesday’s lows, US oil prices are still trading about $75 above the negative prices hit on April 20. But energy analysts don’t expect a repeat of that trip below zero, maybe ever again.
Yawger anticipates crude won’t go much lower than $30 a barrel because at that point OPEC would be forced to come to the rescue again.
“I don’t think we’re going into the abyss again like in the spring,” he said.