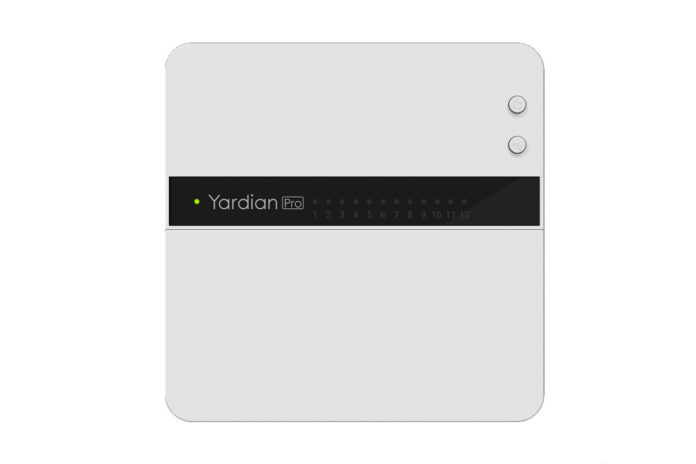 Aeon Matrix launched the original Yardian in 2017 with a strange proposition: Combine a smart sprinkler controller with a home security camera. While the first Yardian was relative well received, the new Yardian Pro simplifies things by ditching the security angle and focusing on irrigation. It’s a capable—if rather confusing—smart sprinkler system.

Let’s start with the hardware. This 6 x 6-inch flat-white box is unobtrusive and modern in design, with a slim bar of LEDs indicating zone activity across the middle. It’s one of a few sprinkler devices that would look OK mounted inside your home. (Also worth noting: While the unit is rated for performance in temperatures from -22 degrees Fahrenheit to 140 degrees F, it is not waterproof and can’t be used outside because Yardian does not offer an exterior housing even as an option.) We reviewed the 12-zone model ($200); an 8-zone model ($130) is also available, if you have a smaller irrigation system.

Wiring is simple thanks to spring clips that easily connect to the leads, though some of the interior zone clips can be hard to fully depress without a screwdriver or a sharp fingernail. Yardian also includes a sheet of stickers that let you label your zone wires, which is handy. It’s available in 8- and 12-zone configurations, both of which include two optional sensor inputs for rainfall and water-flow measurement.

This review is part of TechHive’s coverage of the best smart sprinkler controllers, where you’ll find reviews of competing products, plus a buyer’s guide to the features you should consider when shopping for this type of product.

The Wi-Fi in the Yardian Pro is said to be updated since the previous model, now offering “4x more powerful” wireless capabilities; note, however, that it can join only 2.4GHz networks. An ethernet port is also available if you want to hardwire the unit to your router, as is a USB port, if you want to bypass the LAN altogether and connect directly to a cellular data network with a dongle.

My only complaint about the hardware is that rather than using a transformer that attaches to the wall, Yardian relies on a power adapter that resides in the middle of the electrical cable (similar to a typical laptop power adapter). Depending on where your device is mounted, this might mean the adapter will hang suspended in the air, dangling from the Yardian unsupported.

After hardware installation, you turn to the Yardian app, which requires registration and email confirmation before you can get going. Setup requires you to enter an equipment ID that is printed near the wire terminals to pair the device to your account. If you’re an iPhone user, the app then directs you to iOS Home and a HomeKit tag scan to complete the registration process. I didn’t encounter any trouble with any of these steps, though you will need to wait a few minutes for everything to process.

For some reason, most smart sprinkler apps are surprisingly unintuitive, and Yardian’s is no exception. Plan to spend an hour or so over multiple days working through the system and understanding its quirks, of which there are many. For example, if you want to run an on-demand watering session, you’ll find those options under the Control tab. That’s different from “manual” control, though, which is actually one of the three options you can use for running scheduled programs. “Manual” control is a simple timer system, while “conditional” control lets you create a schedule based on time and date as well as temperature thresholds.

Finally, there’s “smart” scheduling, which takes into account plant and soil types, sun exposure, slope, and other variables to determine the optimal schedule for your yard. These types of intelligent scheduling systems can be hit and miss, but I was pleasantly surprised that Yardian came up with very sensible schedule for my yard after I took the time to configure the necessary settings (eight minutes of water per day, adjusted for the season). By default, Yardian adjusts total flow each month, from 100 percent in summer to 20 percent in the winter months, and it can connect with your local water company to automatically account for any restrictions on watering days and times.

The problem is that figuring all of this out involves a ton of trial and error. None of it is intuitive, and even after several days of working with the device I found myself punching random tabs and buttons to hunt down the settings and functions I needed. The hardware also includes two physical buttons that allow you to manually run watering programs; but these aren’t intuitive either, so keep the thick manual handy. The easiest way to run a manual watering program is actually to use the iOS Home app—because that’s all that Home can really do. You can also use Amazon Alexa or Google Assistant to manually start and stop zones by voice, or inquire as to when the next run will occur.

Another small complaint is that the Yardian app inexplicably does not contain an option to send push notifications when watering runs begin and end, only alerting you if your schedule has been skipped. The app does lets you choose which times of day are acceptable to run, but these settings must be configured individually for each day of the week and can’t be applied universally, which makes for a slog. These seem like careless oversights that should have been remedied years ago—along with some general usability improvements.

At this point, Rachio is the clear leader in the smart sprinkler space, and while the Yardian Pro doesn’t rise to the level of challenging it, it does at least come at a slightly better price than the Rachio 3, though the lower-end Rachio 3e is still cheaper than the Yardian Pro. That said, prices are always in flux, and the Yardian Pro at least works well enough and has a solid enough feature set to merit consideration.