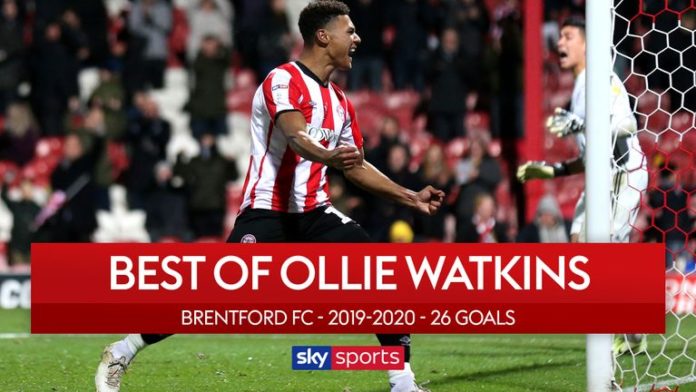 Watkins reunites with Villa boss Dean Smith, who signed the striker for Brentford in 2017

Aston Villa have broken their transfer record to sign Ollie Watkins from Brentford on a five-year deal.

The striker travelled to Birmingham on Tuesday night ahead of the big-money move, which eclipses the £22m Villa spent for striker Wesley from Club Brugge last year.

It is understood the club are to pay an initial £28m fee for Watkins, potentially rising to £33m in add-ons. Villa have beaten city rivals West Brom to the goalscorer’s signature and moved for Watkins after Bournemouth rejected their bid for Callum Wilson, who eventually joined Newcastle.

The deal for Watkins also represents a record sale for League Two club Exeter City, who have cashed in a seven-figure sum thanks to a sell-on clause on their former academy product following his move to west London for less than £2m in 2017.

A new striker was top of Villa’s shopping list this transfer window and manager Dean Smith, who signed Watkins when he was Brentford head coach, believes the 24-year-old will be a big success in the Premier League.

“Ollie has developed into one of the most sought-after strikers in the country and we are looking forward to seeing him show his great qualities in an Aston Villa shirt,” Smith said.

“He is a hugely determined character who has both the ability and personality to succeed at the highest level.”

Watkins added: “I am so excited to join Aston Villa and to reunite with Dean Smith as my head coach. I cannot wait to wear the famous claret and blue in the Premier League. I want to do something special here and score some goals.”

Watkins scored 26 goals for the Bees last season as they missed out on promotion in the Sky Bet Championship play-off final against Fulham.

Brentford remain braced for offers for some of their other best players, notably Said Benrahma, who was also attracting interest from Aston Villa as well as West Ham.

Villa have already completed the signing of full-back Matty Cash on a five-year deal from Nottingham Forest which could be worth up to £16m.

The rise of Ollie Watkins

“I am a big admirer of Ollie, I like him very much,” Paul Tisdale, Watkins’ former manager at Exeter City, told Sky Sports.

“But when he arrived on the scene as a young professional, he was no different to any other young player, he was thinking about what he was going to do when he received the ball.

“Most of the game is off the ball. It is what happens on the turnover or when the ball goes out of play. Are you standing in the right place at the right time and thinking the right thing?

“A football player might only touch the ball 20 times in a game so where is he moving for the rest of the game? What is he thinking? How does he visualise what is coming next?

“With Ollie, it was something very specific and something very technical in terms of his application of the game. He had to work out where he was going to fit into the game. I call it psychological repositioning.”

Find out more about the psychological repositioning of Ollie Watkins