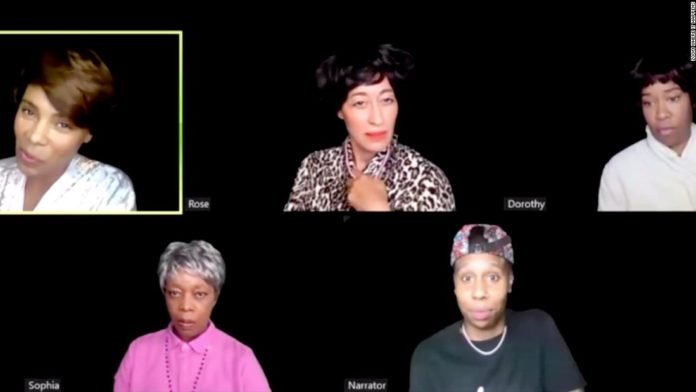 The “Zoom Where It Happens” live table read of an episode of “The Golden Girls” with an all Black cast kicked off Tuesday night with viral star Aaron Scott singing his gospel remix of the theme song.
Scott went viral with his performance of the song in 2016 and it’s recently been made popular again thanks to Tik Tok.
Oscar winner Regina King, Emmy nominee Tracee Ellis Ross, Emmy and Golden Globe winner Alfre Woodard, and Tony nominee Sanaa Lathan on Tuesday starred in the first episode of “Zoom Where It Happens,” a new live table read series presented by Black women artists “to raise awareness, intention, and activation around voting rights.”
The four re-enacted the classic “Flu” episode of “The Golden Girls” which was directed by Gina Prince-Bythewood and hosted by Lena Waithe, who also served as a producer.
Following some opening words from Waithe, the event kicked off with Scott’s performance, much to the delight of many of those watching.
In May the singer told the Washington Post he did his original clip because he was watching the show and was bored.
Scott said he never expected it to go viral and said he’s a “Golden Girls” fan thanks to his mother, who loved the show.
“One day when I was maybe 9 or 10, I heard my mom laughing so hard. I went downstairs and Sophia was snapping out on somebody,” he told the Post. “So I sat down and ever since then I’ve been a huge fan. I have every season on DVD. I have t-shirts. I have puzzles. ‘Golden Girls’ cereal.”
Tuesday’s event spotlighted and and supported Color of Change, one of the nation’s largest online racial justice organization.
The “Zoom Where It Happens” series will continue with a rotating cast of actors every Tuesday until Election Day.