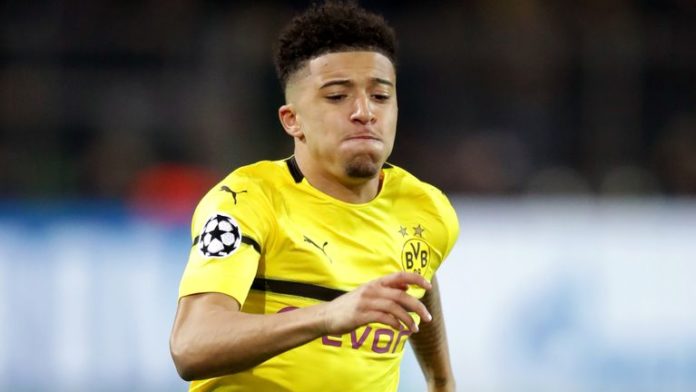 Manchester United have made a breakthrough in their attempt to sign Jadon Sancho by resolving the issue of agent fees and personal terms, Dharmesh Sheth told The Transfer Show.

United are not giving up on trying to sign Sancho – who Borussia Dortmund value at £108m – despite sporting director Michael Zorc suggesting the 20-year-old will not be sold in this window.

However, despite the Bundesliga club’s stance, during the last 24 hours progress has been made between United and Sancho’s representatives.

“I’ve been speaking to somebody close to a potential deal involving Jadon Sancho to Manchester United and in the past 24 hours there have been developments and potentially good news for Manchester United fans, because the issues of agent fees and personal terms, I’ve been told, are no longer a problem,” Sky Sports News reporter Sheth said.

“Manchester United are remaining tight-lipped on these developments but it’s clear that some good progress has been made on overcoming the problems of agent fees and wages.

“We understand that United remain very resolute and determined to not overpay for a player given the realities of the coronavirus pandemic, but given that this was the issue for the past two or three weeks that Manchester United weren’t making a bid because they needed to sort out agent fees and personal terms for Jadon Sancho, this appears to be some sort of a breakthrough.

“It’s our understanding now that the agent fees and the personal terms are not going to be a problem anymore.”

United’s chances of convincing Sancho to come to Old Trafford will have been enhanced by them qualifying for the Champions League, but they also see the German club’s €120m (£108m) valuation for the player under the current coronavirus conditions as “unrealistic” for a player who Dortmund themselves signed for £7.2m three years ago.

The club are also unwilling to break their wage structure for the England international following the unsuccessful transfer of Alexis Sanchez.

United have completed big-money moves for Harry Maguire and Bruno Fernandes in the last two transfer windows but feel the environment for deals has shifted since the coronavirus pandemic – with fees reflecting the tough financial conditions.

Sheth continued: “You could say the onus is now on Manchester United to go to Borussia Dortmund with an official offer and say ‘this is how much we are offering for Jadon Sancho, do you accept?’

“The fact of the matter is that of August 10, Borussia Dortmund had set their own deadline. £108m should have been on the table and if it wasn’t, Jadon Sancho stays at Borussia Dortmund, he goes nowhere.

“However, two things could potentially happen and have to happen for this deal to be properly resurrected. Number one, Manchester United have to go in and make an official bid and number two, Jadon Sancho will then have to go to Borussia Dortmund and say ‘I know you say I’m not for sale, but I do actually want to talk to Manchester United’.

“So there has been a development with regards to agent fees and personal terms, but we haven’t even got to the point where Manchester United are dealing with Borussia Dortmund. That will now be the next step.”