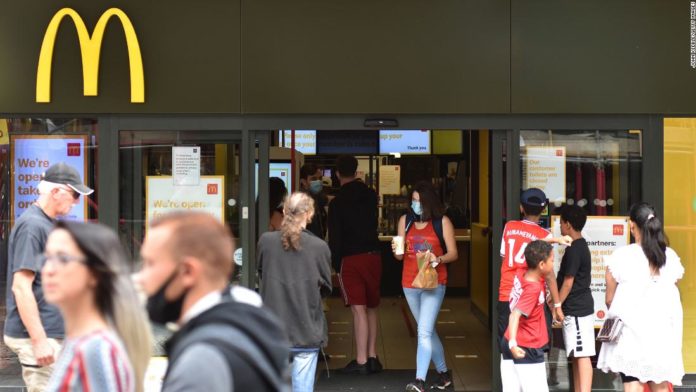 It’s a rinse-and-repeat cycle: Once customers finish their coffee or tea, they return their mug to a McDonald’s restaurant or designated drop-off point. The mugs are washed and readied for the next customer.
But there’s a catch: Customers have to pay a small deposit, the exact amount to be determined, for the mug. They’ll get the money back once they return the vessel. The program isn’t mandatory: The restaurants participating in the pilot program will also continue to serve drinks in disposable cups.
Reusable mugs have been touted as a solution for a tricky environmental problem: Disposable coffee cups. Traditional single-use coffee cups are difficult to recycle because they’re made with both paper (the cup) and plastic (the inner lining). Paper and plastic must be recycled separately, but it’s difficult to separate the thin layer of plastic from the paper. Because of that, most recycling facilities don’t accept the cups, and they end up in landfills or become litter.
That’s bad for the planet. It’s also bad for the images of big companies that want to signal to customers that they care about the environment.
Corporations have recently ramped up the search for a better cup to reduce their environmental impact and improve their reputations — and to make sure they have a solution if disposable cups are banned. Last year, the European Parliament approved a law banning some single-use plastic items, including straws and cutlery, by 2021.
In 2018, McDonald’s committed to find a more environmentally friendly cup as part of the NextGen Cup challenge, which called for ideas and funded prototypes. In the United Kingdom, McDonald’s has started to send recycled cups to special facilities that separate the materials out. And last year, about 30 McDonald’s locations in Germany started using the deposit system to offer reusable mugs.
For the UK pilot, McDonald’s has partnered with Loop, a shopping service that sells items from Häagen-Dazs ice cream to Tide laundry detergent in reusable packages, on the project. Loop, which launched as a pilot program last year, will be available to shoppers throughout the contiguous United States this fall.