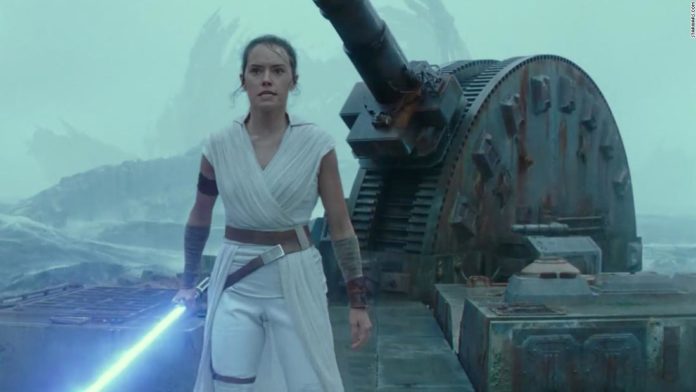 Speaking to guest host Josh Gad on “Jimmy Kimmel Live,” Ridley said there were multiple changes along the way about the question of who Rey’s parents were. According to Ridley, that included a connection to Obi-Wan Kenobi, then the notion that she was “no one” — the theory presented in “The Last Jedi” — before the final outcome, that Rey was the granddaughter of Emperor Palpatine.
“I wasn’t sure what the answer was going to be,” she told Gad.
The question of Rey’s background, given her natural ability with the Force, was the central mystery set up by “Star Wars: The Force Awakens.” That movie was directed by J.J. Abrams, as was “The Rise of Skywalker,” while middle chapter “The Last Jedi” — which took the story in a different direction — was directed by Rian Johnson.
During a panel last year that followed a “Rise of Skywalker” screening, Abrams said it was impossible to please everyone and that the point of the Rey-Palpatine origins was that “anyone can be anything regardless of where you’re from,” and that “the idea that you’re from the worst possible place” felt more resonant and shocking.
Ridley’s comments and the prospect of her character being related to Kenobi fueled a new round of online discussion among fans — “Rey Kenobi” began trending — regarding how that one detail would have altered the arc of the franchise’s mythology.
Gad also asked if Palpatine was indeed her grandfather, who Rey’s grandmother was.
“You tell me, Josh,” Ridley said with a laugh.