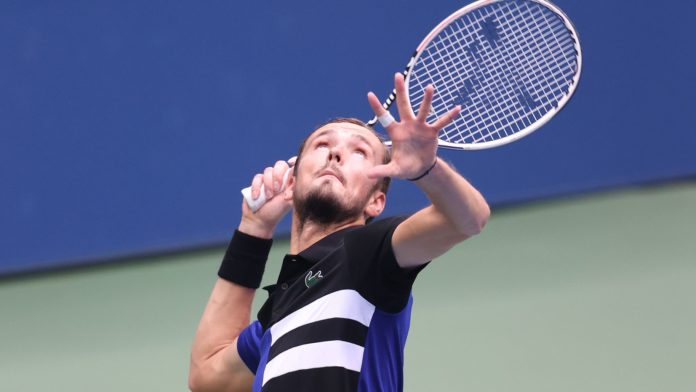 Daniil Medvedev shrugged off an injury scare to beat Andrey Rublev in straight sets and book his place in the US Open semi-finals.

The pair were the first Russian duo to reach the quarter-finals at a Grand Slam since Igor Andreev and Nikolay Davydenko at Roland Garros in 2007.

Medvedev, who was runner-up to Rafael Nadal last year, saved four set points in the first set tie-break. He hit 50 winners in comparison to Rublev’s 22 and the straight-sets victory means that he’s yet to drop a set in this year’s tournament.

No player in the Open Era has won the US Open men’s title without dropping a set. Medvedev will meet either the second seed Dominic Thiem or Alex de Minaur in the semi-finals.

“It was tough at the end, that was why for the first time in almost a year I actually celebrated my win,” he said on court after.

“I felt like I could get in trouble so I was really happy to get the win after that tough tie-break. One point decided two sets, so it was a really tough yet.

The first set between two lifelong friends swung with serve before Rublev let slip a golden opportunity to become the first man to take a set off Medvedev in the tournament, letting slip a 5-1 lead in the tie-break.

He let his frustration get the better of him as he rammed his racket into the court, and also received a code violation for an audible obscenity after Medvedev broke for the first time in the match to go 4-2 up in the second set.

Medvedev looked fully in command until midway through the third set when his movement became restricted, and he called for medical time-out at 4-5 down in the set.

Under increasing pressure given his evident physical issues, Medvedev managed to eke out another tight tie-break to take the match and book his place back in the last four.