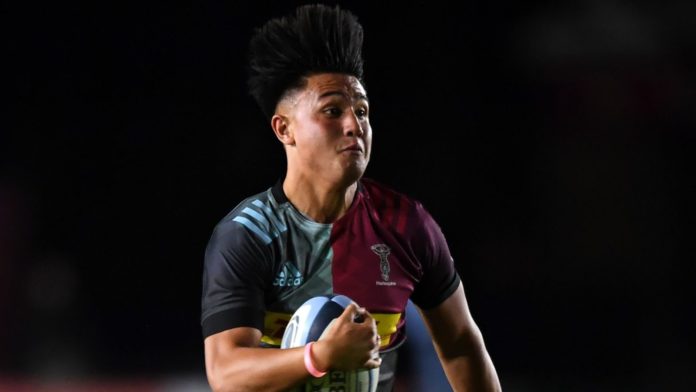 Marcus Smith scored 16 points against London Irish as Harlequins won the battle of the Stoop 38-15 to virtually seal their European Champions Cup spot for next season.

Their bonus-point victory saw them rise to sixth in the table and, with a 13-point gap over ninth-placed Irish, the required top-eight finish is almost guaranteed with only three games remaining.

Despite the Stoop being Harlequins’ home ground, it was technically a home fixture for Irish as Quins have granted them temporary occupancy while their London rivals await their move to their new stadium in Brentford.

Since the resumption, Irish have only picked up a point while losing all six games. Their tries came from Dan Norton and Ben Donnell with Jacob Atkins kicking a penalty and conversion.

Harlequins responded with two tries from Smith with Scott Baldwin, Cadan Murley and Scott Steele scoring one apiece. There was also a penalty try award, with Smith adding three conversions.

Harlequins lost the first two line-outs on their own throw but they still made the better start to take an eighth-minute lead.

Centre James Lang made a couple of telling bursts before the ball was recycled for Smith to skip outside Norton and score.

Norton soon made amends with his side’s first try. Irish built up their first period of pressure and came close on a couple of occasions before former Irish scrum-half Steele was sin-binned for a deliberate off-side.

The hosts immediately made their numerical advantage count when they moved the ball wide to provide Norton with an easy run-in.

Atkins converted before the home side extended their lead thanks to an excellent piece of skill from James Stokes.

The full-back cleverly chipped over a defender before collecting and sending his skipper Jack Cooke away. The flanker was hauled down just short of the try-line but Donnell was up in support to score.

Steele then returned in time to see Quins score their second try when Baldwin finished off a line-out drive.

Smith again missed the conversion, with Atkins kicking a penalty before Aaron Morris burst through a hole in the Irish defence and looked a certain scorer until a superb cover tackle from Ollie Hassell-Collins slammed the full-back into touch.

Irish were therefore able to retain their 15-10 lead for the half-time break but nine minutes after the restart their opponents scored the best try of the game.

From inside their own 22, Quins counter-attacked in style by producing a flowing move which saw Murley and Luke Northmore combine cleverly to send Smith in under the posts.

That try was the catalyst for Quins to take control and it came as no surprise when first Steele darted over from close range for the bonus point before victory was sealed with a penalty-try award and then their sixth try from Murley.