Home Sport Is there any stopping the Chiefs in 2020? 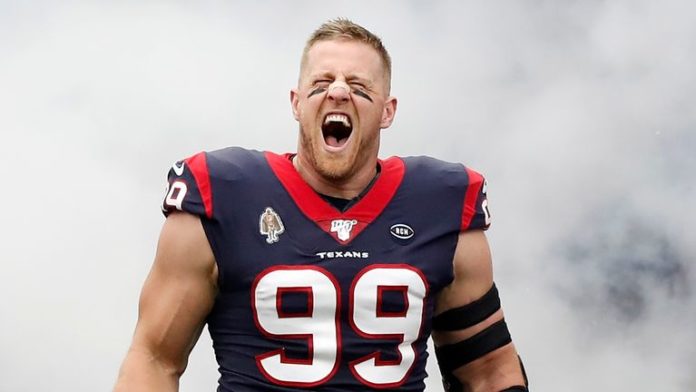 Watch the opening game of the 2020 NFL season – Houston Texans @ Kansas City Chiefs – live on Sky Sports NFL from 1.20am on Friday

Is there any stopping the Kansas City Chiefs this season?

The Chiefs kick off the new NFL campaign, and their quest to become only the eighth team – and first since 2005 – to claim back-to-back Super Bowl titles, with the visit of the Houston Texans on Thursday night.

The last team to achieve such a feat was, yes, you guessed it, the New England Patriots; but is there a changing of the guard taking place in the NFL? And not just because a certain Mr Brady has since left Foxborough for sunnier climes down in Florida; are the Chiefs the next great dynasty?

Chris Simms certainly thinks so, saying on Wednesday’s Pro Football Talk, “I’m in the camp that thinks the pressure is off [Kansas City] and they’re going to seize greatness now.

“I think their quarterback is going to keep a red-hot poker on everybody’s butts in the organisation. I don’t think he’s a guy to sit back and say, ‘oh, it’s cool, I’ve won one, let me sip a pina colada and hang out now’.

“Everything we’ve seen or heard; this guy is going for all-time greatness. I’m one of those in the ‘watch out for the Chiefs’ camp this year.”

Quarterback Simms is referring to is, of course, the MVP from Super Bowl LIV, Patrick Mahomes, who drove his team to 21 unanswered points in the fourth quarter as Kansas City stunned the San Francisco 49ers 31-20 to secure the franchise’s second Vince Lombardi Trophy, and first for 50 years.

As for the Chiefs, following that first win in 1970, they endured a postseason drought of nearly two decades, with just one 1986 Wild Card defeat to their name. The 1990s brought a slight upturn in fortunes, but only helped secure them the tag of ‘chokers’, as they made a habit of blowing leads in spectacular fashion and struggled to win at home.

Head coach Andy Reid, who had seemed to suffer from the same affliction during his 14 years with the Philadelphia Eagles, has turned the team around since taking over in 2013 and, paired with Mahomes, you can’t imagine the franchise stalling in such a fashion this time round.

Mahomes – the No 10 overall pick in the 2017 draft – pretty much red-shirted his rookie season behind steady starter Alex Smith, but then exploded in his second year, being named league MVP after throwing for a staggering 5,097 and 50 touchdowns.

He took Kansas City to the AFC Championship game, only for them to come unstuck in overtime against those pesky Patriots. But, last season, the Chiefs laid waste to all that stood before them and now it’s them that have the target on their back and there are plenty of talented teams looking to knock them down off of their perch.

While Mahomes may have won the most coveted prize in football back in February, the 2019 season up till the turn of the year belonged to another sophomore quarterback sensation, in league MVP Lamar Jackson of the Baltimore Ravens.

The Ravens owned the best record in the NFL, at 14-2, but the No 1 seeds couldn’t quite get it done against a streaking Tennessee Titans side in the divisional round of the playoffs.

Baltimore and Jackson, however, will come again. As will Tennessee, having locked up their key offensive contributors from last year – QB Ryan Tannehill and RB Derrick Henry – for 2020, as well as adding defensive end Jadeveon Clowney this week to an already stellar defence.

Over in the NFC, could Kyler Murray continue the trend set by Mahomes and Jackson and become the third-consecutive quarterback to be crowned league MVP in their second season? He impressed enough in his rookie campaign to see the Arizona Cardinals considered a ‘dark horse’ contender for 2020 – the addition of premier wideout from DeAndre Hopkins from Houston certainly helps.

But, beware the ‘hipster pick’, as proven by the fate that befell that of the 2019 variety, the Cleveland Browns who, after pairing another big-money acquisition at receiver (Odell Beckham Jr) with a young, talented QB (Baker Mayfield), were tipped to catch fire, only to flame out to a hugely disappointing 6-10 record.

As a result, people are sleeping on the Browns for the upcoming season, along with the likes of the Steelers, Indianapolis Colts, Chicago Bears, Atlanta Falcons and Los Angeles Rams, all of whom have been there or thereabouts in recent seasons, but are just coming off the back of a down year.

The NFC, in particular, is wide open, and though the 49ers might start as favourites for another conference championship, their divisional rivals, the Seattle Seahawks, along with the Cowboys, Eagles, Packers and New Orleans Saints, should all be in the shakeup.

The Drew Brees’, Aaron Rodgers’ and Tom Bradys of the world are all still around and will be competitive, though the site of Brady in red and gold and not blue and silver will take some getting used to as he begins a new era at the age of 43 with the Tampa Bay Buccaneers, who will be fascinating to watch.

So will the developments over in New England, with the equally unfamiliar sight of Cam Newton leading out the Patriots in 2020. But, crucially, Bill Belichick is still at the helm and the mind boggles at what he could potentially be scheming up for Cam’s unique skill set.

Also, in Belichick’s 20 years in charge, the Patriots have missed the playoffs only three times, and they registered a losing record in only one of those, when they went 5-11 in his very first season. As much as many might welcome the Patriots demise, any suggestions of it actually happening are hugely premature.

Three years ago, after New England had just ticked off their fifth Super Bowl victory – mounting a crazy comeback of their own to beat the Falcons from 28-3 down – we pondered just who could stop the Patriots ahead of the 2017 season?

Ultimately it proved to be the Eagles in a rip-roaring finale, but not before a certain Kansas City squad put down a marker to beat the defending champs 42-27 in the Thursday night season-opener.

Now the table has flipped and we’re left wondering if there’s any stopping the Chiefs in 2020? Their opponents on Thursday night, the Texans – a serious contender in their own right – will be eyeing up a similar style upset to prove that there is.

Sky and the NFL have agreed a new five-year partnership to broadcast the NFL, the first time the league has joined with an international broadcaster to launch a channel dedicated to the sport.

The brand new in-season channel will be the round-the-clock home of the NFL on television in the UK and Republic of Ireland from the regular season through to the playoffs, with Super Bowl LV live from Raymond James Stadium in Tampa on Sunday, February 7.

Sky Sports NFL is your dedicated home of the NFL and will feature a minimum of five live games each week, including first-pick exclusive games in the 6pm and 9pm slot every Sunday alongside NFL Redzone and every Thursday Night, Sunday Night, and Monday Night Football.