Home Culture Kim Kardashian posts video to prove how many toes she has amid... 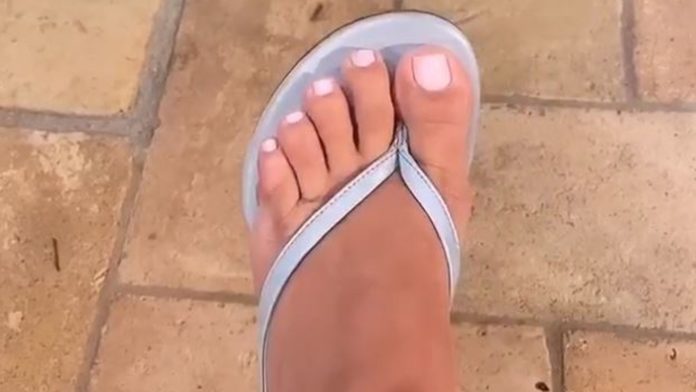 Kim Kardashian West has posted a video to prove she only has five toes on each foot.

The Keeping Up With The Kardashians star has apparently been the subject of much speculation over her supposedly mysterious “sixth toes”.

However, she resorted to releasing footage of her seemingly normal feet in an effort to dispel the rumours.

“Okay, so everyone thinks that I have six toes and it’s really wild,” the 39-year-old said in a clip on Instagram Stories, while wiggling her toes.

Counting out each of the digits – presumably in an effort to provide further clarification – Kardashian West says the sides of her feet sometimes look like extra toes in photos when she is wearing certain shoes.

“One, two, three, four, five – but it’s this part of my foot that when I wear a shoe just like this it like, smashes down right here and in a picture, I don’t know why, that looks like a sixth toe,” she said.

“I hope that answered my sixth-toe question because I only have five toes on each foot.”

It comes after the Kardashians announced earlier this week that their hit show would come to an end following its 20th season, which will air in early 2021.

Keeping Up With The Kardashians has followed the family for 14 years, making household names of its stars – sisters Kourtney, Khloe, Kylie and Kendall, as well as Kim, and their “momager” Kris Jenner and her now-ex-husband Caitlyn Jenner.

“It is with heavy hearts that we’ve made the difficult decision as a family to say goodbye to Keeping Up With The Kardashians,” Kardashian West said in a statement.

“After what will be 14 years, 20 seasons, hundreds of episodes and numerous spin-off shows, we are beyond grateful to all of you who’ve watched us for all of these years – through the good times, the bad times, the happiness, the tears, and the many relationships and children.