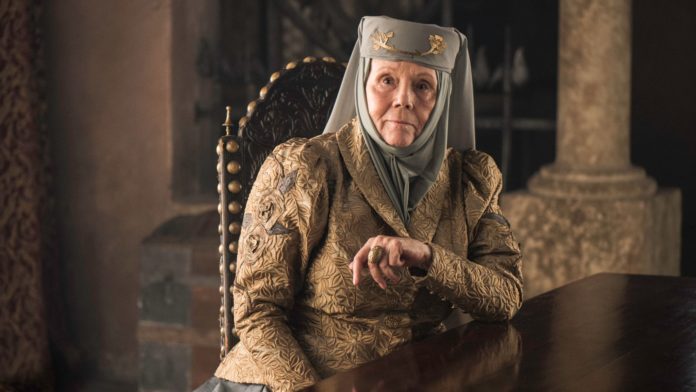 Tributes are being paid to “icon” Dame Diana Rigg, a Bond girl and star of Avengers and Game Of Thrones, who has died at the age of 82.

The award-winning actress died of cancer, which had been diagnosed in March, surrounded by her family on Thursday morning.

Best known as secret agent Emma Peel in The Avengers in the 1960s, and more recently for playing Olenna Tyrell in Game of Thrones, Rigg was a star of stage and screen whose career spanned several decades.

She also played Countess Teresa di Vicenzo, James Bond’s wife – the only woman to get 007 to the altar – in On Her Majesty’s Secret Service.

Paying tribute to her “beloved Ma”, her daughter, Rachael Stirling said the actress “spent her last months joyfully reflecting on her extraordinary life, full of love, laughter and a deep pride in her profession”.

She added: “I will miss her beyond words.”

Rigg’s agent, Simon Beresford, announced the news “with tremendous sadness” in a statement describing the star as “an icon of theatre, film, and television”.

He said: “She was the recipient of BAFTA, Emmy, Tony and Evening Standard awards for her work on stage and screen.

“Dame Diana was a much loved and admired member of her profession, a force of nature who loved her work and her fellow actors. She will be greatly missed.”

Rigg spent several years in the 1960s as a member of the Royal Shakespeare Company and had smaller roles on screen before her break came in The Avengers. Starring alongside Patrick McNee’s John Steed, together they formed an impeccably dressed duo who fought crime and traded quips.

Other acting credits included the Duchess of Buccleuch in Victoria, and she also starred alongside her daughter in the sitcom Detectorists.

Playwrights Sir David Hare and Sir Tom Stoppard also paid tribute, with Sir Tom saying: “For half her life Diana was the most beautiful woman in the room, but she was what used to be called a trooper.

“She went to work with her sleeves rolled up and a smile for everyone. Her talent was luminous.”

Theatre director Jonathan Kent, who directed the actress in a series of roles, said: “Diana Rigg’s combination of force of personality, beauty, courage and sheer emotional power, made her a great classical actress – one of an astonishing generation of British stage performers.

“I was so fortunate to direct her in a series of great classical roles – Medea, Phedre – in Ted Hughes’ version, specially written for her – Mother Courage and Dryden’s Cleopatra. Her dazzling wit and that inimitable voice made her an unforgettable leading figure in British theatre.”