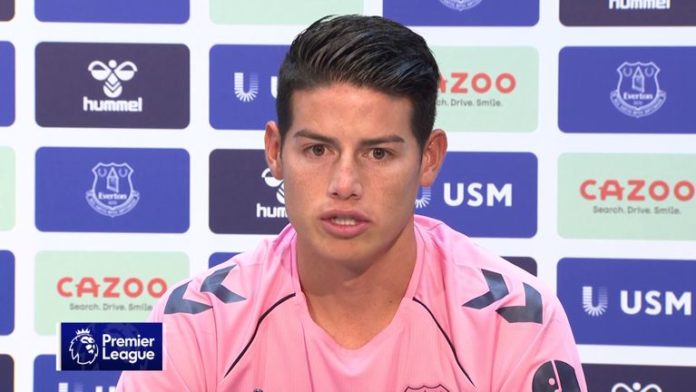 James Rodriguez says Everton “mean business” following his reunion with Carlo Ancelotti and he is confident the club can end their 25-year wait for silverware.

The 29-year-old joined the Toffees on Monday from Real Madrid on an initial two-year deal, and the forward insists he has come to achieve “big things” at Goodison Park.

Rodriguez, who won the Golden Boot at the World Cup in 2014, previously worked under Everton manager Ancelotti at the Bernabeu and at Bayern Munich, and is impressed by the ambition within the club.

“Why not? It is a club that means business,” said the Colombia international when asked if Everton are in a position to win silverware for the first time since the 1995 FA Cup.

“There are a lot of serious-minded people at the club at all levels who mean to achieve and that means winning trophies.

“That won’t happen overnight but I have seen real positive signs we can make progress and I think trophies are more than a possibility.”

Rodriguez boasts an enviable trophy haul, featuring eight domestic championships and three major European titles, and says he is not daunted by the challenge of competing in a new league.

“I’m the sort of person that always wants to achieve more,” he said.

“It’s a new league and a very important, big league. I’m also the sort of person that learns every day, I’ve got a manager alongside me who I’ve worked with before and knows me very well.”

Rodriguez scored 13 goals in La Liga under Ancelotti in 2014/15 and the high-profile signing admits the opportunity to work with the Italian once again was too good to turn down.

“He influenced me a lot, it’s great to be back having a chance to work with the manager again.” he added.

“There’s been a good feeling and relationship between us. I’m coming to a good club with a lot of history, I’m keen to play to the best of my ability.”

Midfield duo Allan and Abdoulaye Doucoure have also arrived this summer from Napoli and Watford respectively.

Ancelotti, who led Everton to a 12th-placed finish in the league following his arrival last December, has now targeted a European finish in his first full campaign in charge and does not believe further summer signings are needed.

“With these three signings I think we did a fantastic job,” the Italian said ahead of Everton’s opening weekend Premier League trip to face Tottenham on Sunday, live on Sky Sports.

“There is some opportunity we can look, but honestly I am satisfied with the squad in this moment.”