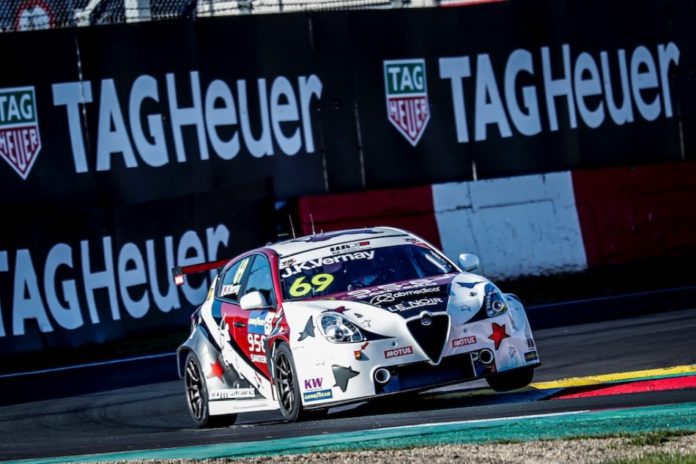 Jean-Karl Vernay completed the final testing opportunity ahead of the delayed 2020 WTCR – FIA World Touring Car Cup season getting underway at the top of the timing screens.

Team Mulsanne’s recent signing produced a session-heading 1m36.771s in his Goodyear-equipped Alfa Romeo Giulietta Veloce TCR by Romeo Ferraris, a time that was matched by WTCR Trophy rival Nathanaël Berthon in the closing moments of the afternoon running.

Vernay has only managed limited kilometres in the Alfa Romeo prior to this weekend’s WTCR Race of Belgium, but his performance in the Zolder sunshine this afternoon points to a promising campaign ahead for the Frenchman and his Italian team, even though the focus of all teams today has been on fine-tuning car set-up for upcoming season opener.

“We finished first day and we can’t say it was bad as we are P1,” said Vernay. “It’s just a test, not a proper race weekend, I think the others are not showing their full potential. But we are happy on what we did, we have some improvements to do on the car, but I think we found some good stuff. We have to continue working tomorrow morning about the plan for FP1 and FP2 to be super productive. We did a good job, it’s good to be on the front for the confidence so it’s a good starting point.”

For Berthon, meanwhile, his session-equalling effort has already appeared to vindicate his decision to return to WTCR in 2020 with Comtoyou DHL Team Audi Sport.

Urrutia, making his WTCR debut this weekend, was quickest at the end of this morning’s session with a 1m37.063s effort.

Luca Filippi, Vuković Motorsport Renault driver Dylan O’Keeffe and Luca Engstler were next followed by Mikel Azcona in the all-new CUPRA Leon Competición. Jack Young and fellow newcomer Gábor Kismarty-Lechner were next but Bence Boldizs didn’t venture out on track.

The WTCR drivers will be back in action for Free Practice 1 at 17h00 CET tomorrow (Friday).