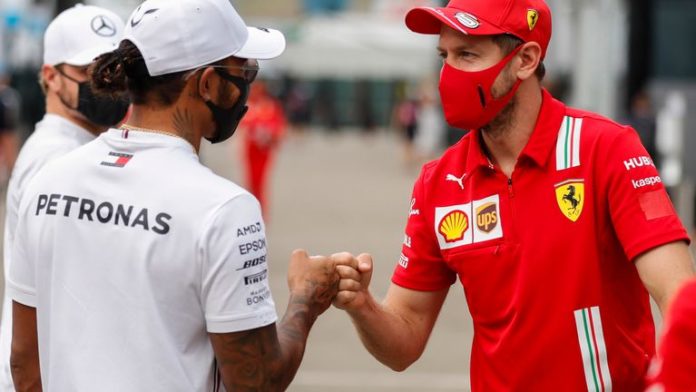 Lewis Hamilton has given his full support for Sebastian Vettel’s “exciting” 2021 move, claiming Formula 1 needed the “great driver” to remain in the sport and that Aston Martin have made the “smartest” decision.

After months of speculation following Ferrari’s unexpected axing, on Thursday ahead of the Tuscan GP Vettel was confirmed as an Aston Martin driver for 2021, replacing current Racing Point driver Sergio Perez.

Hamilton, who has battled Vettel at the front of the grid for over a decade in F1, has spoken of his happiness after hearing about the transfer of one of his most respected rivals and fellow multiple world champion.

Vettel has admitted he considered retiring before signing on with Aston Martin, and Hamilton added: “It’s quite a big shift from Ferrari to an up-and-coming team.

“But I think Formula 1 really needs to keep the great driver that he is in the sport so I’m really happy that he’s continuing and not stopping. I’m just really happy for him because it’s not been the easiest of journeys at Ferrari, and I think he’ll learn so much from there.

“I think it’s one of the smartest moves that Aston Martin could do and I’m excited to see what he contributes and how he helps progress that team forward.”

Vettel is a four-time champion, while Hamilton has six and is closing in on a record-equalling seventh.

Every Tuscan GP session is live only on Sky Sports F1 this weekend.

Vettel will be moving from F1’s most successful outfit to an, on paper, much smaller team in 2021. However, Racing Point, who have been much more impressive than Ferrari this season, have big investment and ambitions for when they morph into the Aston Martin team from next year.

Speaking earlier in the press conference, Hamilton stated: “Honestly, I thought that was the ideal direction he was going to go, I thought it would happen.

“I was really pleased to hear it because if you look at that team, it has new ownership, and has already taken a huge step forwards in its performance and it can continue to grow.”

Hamilton also said Vettel, 33 and two years his junior, has a lot more to give.

“Maybe I’m biased, but I personally believe that experience counts for a huge amount,” he said. “He’s obviously had a difficult time at Ferrari but he is a four-time world champion that can help steer that team even further in a better direction in terms of car development, and you should never take that for granted.

“I think it’s a great move for the team.”

Hamilton added: “Of course, I’m sorry for Sergio – but he’s a great driver and I’m sure he’ll have other options.”