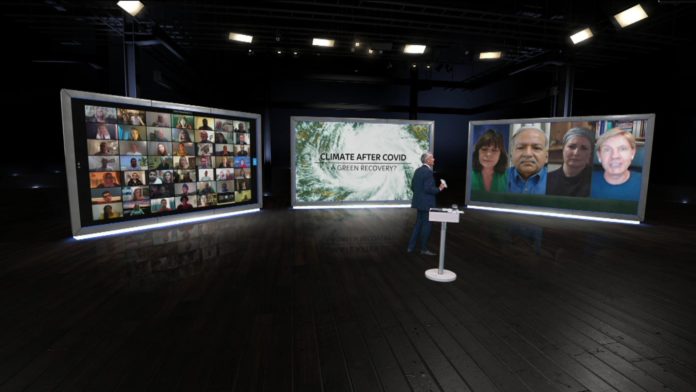 The coronavirus pandemic is an opportunity for a “giant reset” that can allow us to strengthen our efforts to tackle climate change, actor Rainn Wilson has told Sky News.

Best known for playing Dwight Schrute in the US version of The Office, he has more recently become involved in climate activism.

His activism has seen him visit Greenland to see first-hand the effects of climate change, as well as interview Greta Thunberg.

Wilson spoke to Sky News for our special programme Climate After Covid: A Green Recovery?

“Obviously an international pandemic that is actively killing people is going to take priority – and it should take priority,” he told Sky’s climate change correspondent Lisa Holland.

“But it’s not an either or. Yes, it’s a priority, but it’s not like ‘let’s forget climate change, let’s forget racial justice and only work on the pandemic right now’.

“No. We need to work on all of these things. If anything, the pandemic can be, this is a test run for humanity, working together to overcome issues of great odds, of great scope, of great international scope.

“We can do this as a human species inhabiting this planet.

“Not as the denizens of Bolivia and the Netherlands and Mongolia all just working in their little fiefdoms, but working together internationally.”

Wilson said his activism began when he “realised that I needed to do something more than just a couple of angry tweets”.

“I was what I call a ‘slacktivist’. I knew that wasn’t going to cut it,” he said.

Wilson said he wanted his show to be “oddly uplifting”.

“We wanted to reach a new and younger audience about a very serious topic, with me kind of being a dunce who’s being brought along the path towards learning about it,” he explained.

“The response has been exactly what you’d expect. There’s climate change deniers who have all of their usual talking points, and people who are very concerned.

Wilson said that post-coronavirus, the world “really cannot afford to go back to normal”, adding: “This affords us an opportunity for a giant reset, a giant reboot of our priorities moving forward.”

He said that individuals “can make a difference” if enough people independently decide to take action.

However, he continued: “But a thousand maybe, ten thousand does, then if a hundred thousand people are all doing the same thing.

Wilson expressed optimism that humanity will be able to avoid the worst impacts of global warming, citing the engagement with the issue among young people as the source for this upbeat assessment.

“We need to get out of the way, allow them to lead and that’s really inspiring, the amount of young people that are behind the kind of drastic change that humanity is going to need to make to fix this thing,” Wilson said.