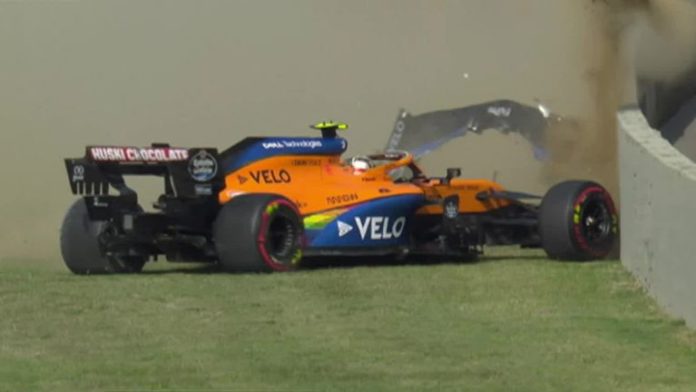 Valtteri Bottas was fastest ahead of Lewis Hamilton and Max Verstappen in a closely-fought Tuscan GP second practice, which featured costly crashes and spins as drivers explored the unforgiving limits of Mugello.

Lando Norris heavily crashed his McLaren, Kimi Raikkonen and Sergio Perez collided, while both Ferraris spun as Charles Leclerc failed to replicate the promising pace from his start to the team’s milestone weekend.

Sebastian Vettel also stopped on track at the end of the session with a mechanical failure, citing an engine problem.

Leclerc’s disappearance from the sharp end of the timesheet – he finished 10th in the lead Ferrari in P2 – meant F1 2020’s usual big-hitters formed the top three, with Bottas enjoying a perfect start to the first-ever Tuscan GP.

Bottas ensured he would finish Friday with back-to-back fastest times by setting the pace on the soft tyre with a 1:16.989, 0.2s ahead of Mercedes team-mate Hamilton.

And Verstappen was much closer to Mercedes as probably expected on the high-speed, high-downforce circuit, only four-hundredths of a second slower than Hamilton.

Bottas, Hamilton and Verstappen enjoyed a big buffer to the next fastest car – Alex Albon in the other Red Bull, almost a second off the pace.

There was incident aplenty in P2, with two red flags and plenty of driver errors around the demanding circuit, making its much-anticipated debut on the F1 calendar.

Leclerc was the first driver to spin, at Turn 12, as he went around in his Ferrari into the gravel, ruining an early lap.

But that was nothing compared to Norris’ big shunt, the young Englishman making a mess of his McLaren front wing after clipping the gravel when running only slightly wide at Turn Three on a qualy practice run.

That led to a red flag, and Norris – who was up in fourth early on – failed to get back out on track, meaning he finished down in 14th, although only one place behind team-mate Carlos Sainz.

“As much as I hated that there was gravel as I ended up crashing, it’s better like this,” said Norris. “It’s more tricky, but more challenging – and I think that’s what it should be like.”

After a pirouette from Vettel, who finished outside the top-10 in both Friday sessions, Raikkonen and Perez clumsily made contact to cause another red flag.

Perez came out of the pits just as Raikkonen was speeding into Turn One, but despite both drivers appearing to notice one another they collided going into the corner, with plenty of debris then on track.

The incident is under investigation from race stewards.

P2 then finished with Vettel pulling off to the side of the track as the chequered flag waved, which was a disappointing end to an up-and-down day for Ferrari, celebrating their 1000th F1 race this weekend.

What’s the pecking order at Mugello?

Red Bull appear to have re-established themselves as Mercedes’ closest rivals for the weekend, but behind them it’s much more difficult to predict – not helped by Ferrari’s confusing pace and McLaren’s issues.

Renault were fifth and sixth, with Daniel Ricciardo ahead of Esteban Ocon, while Sergio Perez ensured the fancied Racing Point had at least one car in the top-10.

AlphaTauri’s man of the moment Pierre Gasly was eighth, while Raikkonen was surprisingly faster than Leclerc in the Ferrari-powered Alfa Romeo.