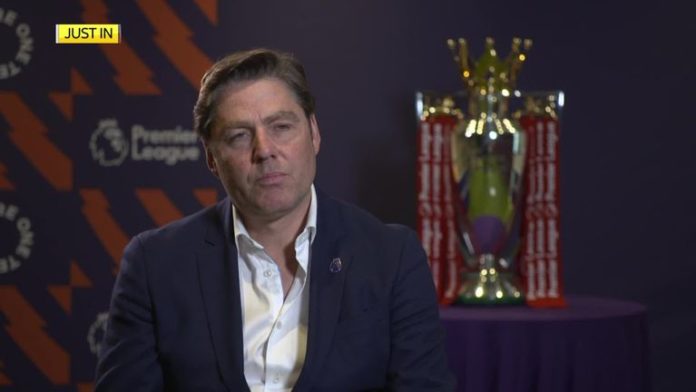 Premier League: “For each month of the season without fans, more than £100m is lost to football across the leagues, with consequent damage to the local and national economy.”

The Premier League has urged the Government not to delay plans for the safe return of supporters to stadiums, warning football stands to lose £100m a month while matches are played behind closed doors.

Prime Minister Boris Johnson confirmed earlier this week that plans for fans to return to sports stadiums from October 1 are to be reviewed, following a rise in COVID-19 infections across the country.

The Government have also capped pilot events already pencilled in at a capacity of 1,000, regardless of the size of the venue.

Premier League CEO Richard Masters has told Sky Sports News that he is prepared to work with the Government on the phased return of supporters to stadia.

Amid continued financial turmoil caused by the coronavirus pandemic, clubs have suffered severe financial losses due to a lack of matchday revenue, and Masters claims the top flight lost a total of around £700m last term.

A statement released on Friday read: “The Premier League has written to Government today to express its concern at the decisions taken to restrict, and potentially delay, the planned programme for the return of fans to football stadiums.

“With test events now capped at 1,000 supporters, we believe they will not provide any opportunity to properly test and evaluate measures designed to maximise fan safety.

“Therefore, Premier League clubs will defer holding test events until a sufficient number of fans are allowed back to enable thorough trials to take place. At 1,000 supporters, not only would there be little to learn from a test event, but each match would be heavily loss-making.

“For each month of the season without fans, more than £100m is lost to football across the leagues, with consequent damage to the local and national economy.

“It also harms the employment prospects of more than 100,000 people whose jobs depend on matchday activities.

“Our clubs have already prepared test events and can offer larger scale trials to prove it is possible to produce bio-secure, safe environments, as was proved through the successful delivery of Project Restart.

“The Premier League recognises the ambition of Government’s Operation Moonshot and will support the project’s objectives to get fans back into stadiums. However, we believe measures are already available which would allow the safe return of fans and should also be activated now.

“As the Government begins its review of the October 1 date for the return of spectators to sport, the Premier League asks that the high safety standards which can be achieved by our clubs are fully taken into account before any decision is taken and that sport is not left behind other industries.”

Brighton’s pre-season friendly against Chelsea, which was watched by 2,500 Brighton season ticket holders and club members in adherence to social distancing protocols, was included in a raft of pilot events which were given the go-ahead by the Department for Digital, Culture, Media and Sport (DCMS) last month.

A small number of spectators were permitted to watch the Snooker World Championships during August, while the Premiership Rugby game between Harlequins and Bath at The Stoop on Sepember 5 hosted 2,700 fans.

West Ham vs Arsenal Women in the Women’s Super League on September 12 and the FA Vase and FA Trophy finals day on September 27 are some of the sporting fixtures still pencilled in.

A pilot scheme for fans to be present for horse racing at Doncaster was postponed on Wednesday, while Yorkshire’s Vitality Blast match against Durham and Cambridge United’s clash with Carlisle in Sky Bet League Two have also been cancelled.

In Scotland, Aberdeen vs Kilmarnock and Ross County vs Celtic will have 300 fans in attendance on Saturday, following approval from the Scottish Government.

The UK Government is to bring in tighter social distancing measures from Monday September 14, when gatherings of more than six people will be illegal, but this restriction will not apply to professional sports teams.