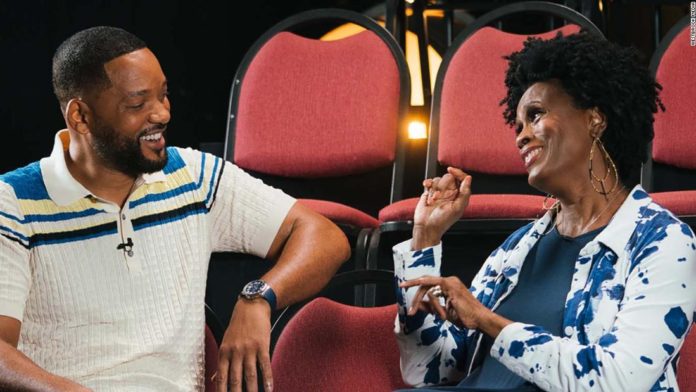 Will Smith has released two first-look photos at the upcoming reunion special that will air on HBO Max. It was taped Thursday which was the 30th anniversary of the hit show’s debut. (HBO Max is owned by CNN’s parent company.)
One of the photos shows Smith sitting down to talk with Janet Hubert, the actress who originated the role of Aunt Viv, for the first time in 27 years in what HBO Max described as “an emotional reunion and a candid conversation.”
“The Presh Prince of Bel-Air” ran on NBC from 1990 to 1996, with Hubert playing the character until she was let go in 1993. She was replaced in the role by Daphne Maxwell Reid.
Things had reportedly been less than friendly between her and Smith, the star of the show who played a fictional version of himself as a teen who moves from Philadelphia to live with his affluent aunt and uncle in California.
In 2016, she publicly slammed him and his wife, Jada Pinkett Smith, over their stance on the #OscarsSoWhite movement.
Smith also shared a picture of him being joined by series regulars Reid, Tatyana Ali, Karyn Parsons, Joseph Marcell and Alfonso Ribeiro, as well as recurring co-star DJ Jazzy Jeff.
On his verified Instagram account, Smith paid tribute to co-star James Avery, who played Uncle Phil and who died of complications from open-heart surgery in 2014, writing in the caption of the photos, “RIP James.”
The reunion special is being billed as “a funny and heartfelt night full of music, dancing, and more special surprise guests, in honor of the series that ran for six seasons and 148 episodes.”
Produced by Westbrook Media, the reunion will launch on HBO Max around Thanksgiving.
HBO Max is the exclusive subscription video on demand home of the full original series library in the US, debuting on the platform when it launched in May.