Home Culture BTS on making music, watching Netflix and working out during quarantine 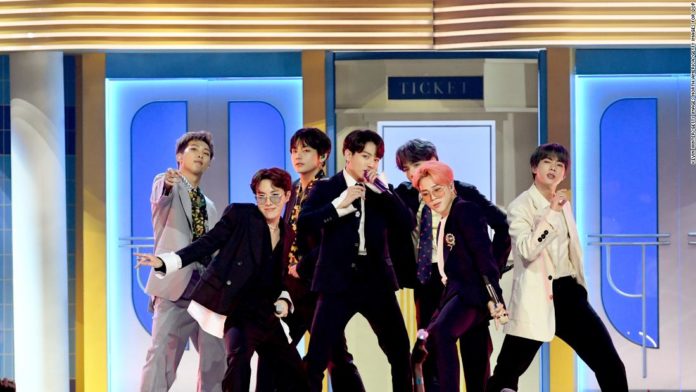 Members of the international K-pop sensation that is BTS were supposed to be on tour right now. But due to the Covid-19 pandemic, they’ve had to press pause.
Aside from releasing their latest hit single, “Dynamite,” the group told CNN in an interview on Friday they’ve been spending a lot of time in recent months streaming shows, like a lot of us.
“We’re working out, watching Netflix and learning to play instruments. I think we’re doing a lot of self-development, and also just trying to stay active,” J-Hope said.
Jimin added, “We’re working on a new album. Although we cannot say for sure how concerts are going to go, we’re still working very hard. Personally, I don’t think I’m doing a lot of things myself.”
The global pandemic hasn’t slowed down the group’s success.
“Dynamite,” their first full English song, currently sits at the top of the Billboard Hot100 chart for the second consecutive week. This makes BTS the first South Korean pop act to ever achieve such a milestone, earning praise from fellow artists like Justin Bieber.
BTS, which stands for Beyond the Scene, said they felt they needed give their audience new music amid these challenging times.
“If everything went according to plan, we’d be on tour right now, but the pandemic has changed everything. So we thought about what we can do, and what we can do best at this point, in this situation. Everyone is going through such a difficult time, so we wanted to cheer them up,” Suga told CNN.
Band members Jin, Suga, J-Hope, RM, Jimin, V and Jungkook, still feel like their rise is a bit of a “pinch me” moment.
“It still doesn’t feel 100% real because we can’t perform in front of Army [the nickname for their fans]. We do and see all these things, but we don’t have the opportunity to perform,” Jung Kook said.
The group has been frequently compared to The Beatles, even breaking one of the English rock band’s records with three Billboard No. 1 albums in a single year.
J-Hope said being compared to legendary group is humbling.
“It’s such a great honor to be mentioned along The Beatles. We want to keep doing our own music and show our own colors,” J-Hope said. “As big fans of The Beatles, we are thankful for such association and we want to work even harder to put out great music. We will try to make the name BTS sound as cool as The Beatles.”
The group’s worldwide recognition grew in 2018 with their albums “Love Yourself: Answer” and “Love Yourself: Tear.” Beyond their accomplishments together, they’ve also scored numerous hits with other artists like Halsey, Ed Sheeran, Nicki Minaj and Fall Out Boy.
Their massive fan base is like no other.
But the group acknowledges their fame, comes with some tradeoffs.
“In Korea we call it fame tax, which we have to pay,” RM said with a smile. “As a citizen we have to pay a fame tax and we always pay it. You know, you have some positive sides and some negative sides as well but it’s our destiny.”
Jin said although he’s recognized everywhere he goes, making South Korea proud makes it all worth it.
“There are rare occasions when I inevitably have to go out. And when I do, people come up to me to say they’re really glad to see me, and that they’re really proud of how more people got to know about Korea because of us,” he said. “In those moments, I get a sense of fulfillment and feel like I’ve actually shown something to them.”
That BTS Army has helped propel them to shatter records across the music industry and also came to their defense on social media last year when the group was shut out from Grammy nominations.
The group is more hopeful for a nod next time around.
“We grew up watching the Grammys,, so we know of its significance. And it would be incredible if we could be nominated,” Suga said. “We never had a Grammy in mind when we first began, but it’s now become a more tangible dream. It’s something we do want to accomplish, of course, but it’s also not something we can make happen just because we want it. What we can do is to keep doing the best we can at what we’re doing.”