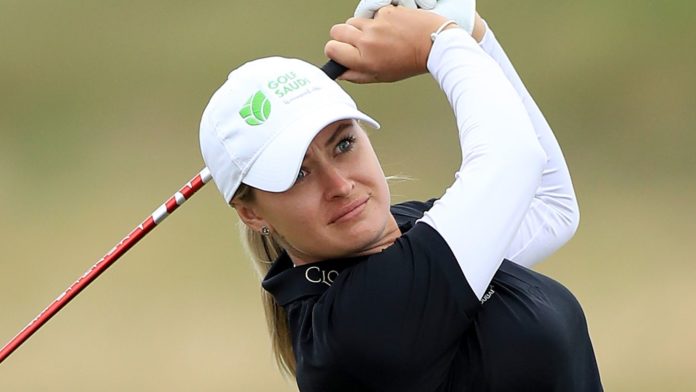 Amy Boulden will go into the final round of the VP Bank Swiss Ladies Open just a shot off the lead after she fired a superb seven-under 65 on day two at Golfpark Holzhausern.

Boulden emerged as the biggest threat to Sanna Nuutinen’s bid for back-to-back wins, with the in-form Finn adding a 68 to her opening 66 to retain the outright lead on 10 under par.

Nuutinen, a winner on the Ladies European Tour’s Access Series last week, cruised to four under for the day before running up a scrappy six at the long 17th, although she did bounce back to birdie the last to ensure she would finish one ahead of Boulden and Morrocan Maha Haddioui.

“This is my fifth event in a row so every day, it’s just another round of golf for me, I don’t know anything else at the moment,” said Nuutinen. “I am just in a process, trying to get better every day, and I am still working on a drill on my swing.

“I haven’t been result-orientated so I like to keep it that way. I’d be lying if I said I wasn’t thinking about the win, of course it will creep into my mind but, as boring as it sounds, I’m going to try and take one shot at a time.”

Boulden is also chasing her maiden LET title having started the year with victory in the Final Stage of Qualifying School in January, and the Welsh star will head into Saturday’s final round full of confidence.

After a solid, outward 33, Boulden began the back nine with three birdies in four holes and then gained three shots on the leader in one hole when she drilled her second to eight feet at the 17th and converted the chance for eagle.

“I’ve felt like I’ve made some good improvements with my swing and I have made some great progress, I just need to take it into the tournaments,” said Boulden. “This week I’ve holed a lot of really good putts, especially inside 10 feet, which have been crucial.

“It has been one of my goals this year to get back into contention and see how I handle the pressure. My boyfriend is my coach and he’s helped me understand why it doesn’t always transfer over from practice and I have been playing a few mental games in preparation for this week.”

Haddioui birdied the final two holes to match Boulden’s 65 and join her on nine under, while Race to Costa Del Sol leader Emily Kristine Pedersen was also seven under for the day and achieved the rare feat of making three eagles in the same round.

The Dane remarkably recorded threes at the par-five third, 10th and 16th holes, although she made ‘only’ a birdie at 17 as she closed on eight under par, while Rose Ladies Series co-founder Liz Young is two strokes further adrift after a 66.