Home Culture Dak Prescott reveals he got help for depression: “It saves lives” 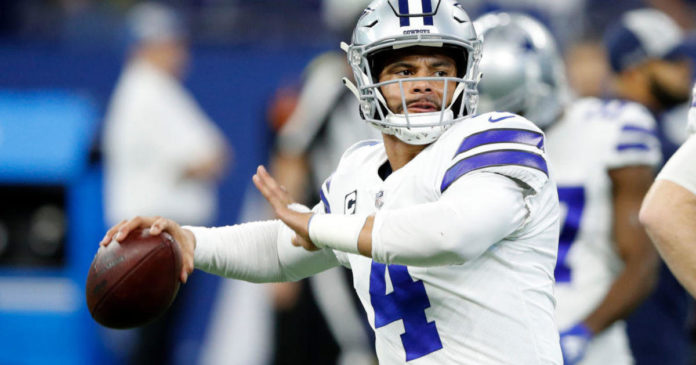 Dallas Cowboys quarterback Dak Prescott revealed he was dealing with depression during the onset of the coronavirus pandemic and sought help after the death of his brother, Jace.

In an interview with In Depth with Graham Bensinger, Prescott discussed the “burden” Jace went through after their mother died of colon cancer in 2013, saying he “didn’t know how to be vulnerable about it.” He then spoke about his own struggles and receiving news of his brother’s suicide in April.

“Honestly, a couple of days before my brother passed, I started experiencing depression,” Prescott said. “I didn’t know what I was going through, to say the least, and hadn’t been sleeping at all. But for one night, I sleep the best I’ve slept, missing 10-plus calls from Tad and giving my dad enough time to come in my bedroom and tell me what happened. So I woke up after the best night of sleep I’ve had in 2020 from the worst news — some of the worst news I’ll ever get.”

Prescott, in a news conference Thursday, elaborated on his mental health, saying he struggled with the isolation of quarantining away from others during the pandemic.

“When you have thoughts that you’ve never had, I think that’s more so than anything a chance to realize it and recognize it, to be vulnerable about it,” Prescott said. “Talked to my family, talked to the people around me simply as I did at the time. Some of them obviously had dealt with it before, was able to have those conversations and then reach out further just to more people.”

“Mental health is a huge issue and a real thing in our world right now, especially in the world we live in where everything is viral and everyone is part of the media. (You) can get on social media and be overcome with emotions and thoughts of other people and allow that to fill in their head when things aren’t necessarily true, whether it’s getting likes on Instagram or something being viewed or getting bullied or whatever it may be,” he said.

Many praised the 27-year-old quarterback for his honesty, but during Thursday’s airing of “Undisputed,” Fox Sports commentator Skip Bayless called Prescott’s battle with depression a “weakness,” drawing fierce criticism of his remarks from athletes, sports personalities and his own network, which said called the comments “insensitive.” Bayless later defended his remarks, saying they were “misconstrued.”

When asked by a reporter if he ever thought he should hide his feelings, Prescott told reporters Thursday that would be the actions of a “fake leader.”

“Being a leader is about being genuine and being real,” he said. “Before I even lead, I have to make sure my mind is in the right place to do that and lead people to where they want to be. I think that is important — to be vulnerable, to be genuine and to be transparent.”

If you or someone you know is in emotional distress or suicidal crisis, call the National Suicide Prevention Hotline at 1-800-273-TALK (8255).

For more information about mental health care resources and support, The National Alliance on Mental Illness (NAMI) HelpLine can be reached Monday through Friday, 10 a.m.-6 p.m. ET, at 1-800-950-NAMI (6264) or email info@nami.org.