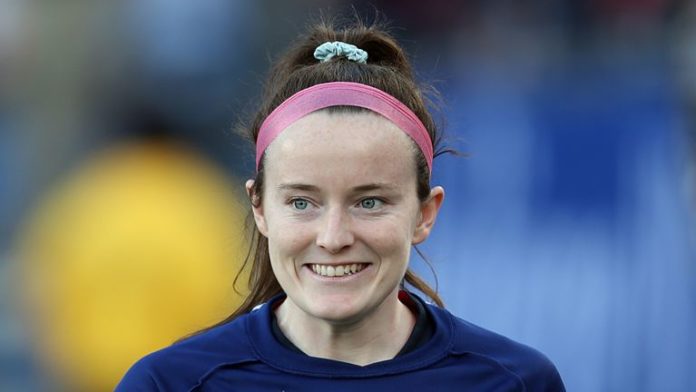 USA World Cup winner Alex Morgan is close to joining Tottenham Women on a short-term deal until the end of December.

Morgan most recently played for Orlando Pride in the National Women’s Soccer League. She would become the latest USA World Cup winner to join the WSL after Manchester City signed Sam Mewis and Rose Lavelle, while Tobin Heath and Christen Press have arrived at Manchester United.

The 2019 Silver Ball winner Morgan scored a header in USA’s 2-1 defeat of England in last year’s World Cup semi-final and memorably pretended to drink tea as she celebrated with her team-mates. The 31-year-old gave birth to her daughter Charlie in May.

A move to Tottenham would constitute a second spell in Europe for Morgan, who won the 2016/17 Champions League during her time with Lyon.

How the WSL won the transfer window

As the women’s transfer window closed on Thursday, the Women’s Super League and its clubs will be delighted with the business done over the last few months.

A number of star names have arrived on English shores since June 19, as well as some key signings from within the league, as the WSL gets back up and running after the cancellation of the 2019/20 season due to coronavirus.

After one of the most successful windows for the women’s league – including the British record broken for a women’s transfer – we take a look at some of the talented players you will be hearing about this season.

Denmark captain Pernille Harder is a blockbuster signing for the WSL as well as Chelsea, arriving from Wolfsburg on a three-year deal for a British record fee in excess of £250,000. The striker, who can also be deployed as as attacking midfielder, won the domestic double in each of her four seasons in Germany and netted 103 goals in 113 games.

“She can play for any team in the world but she chose us,” said Blues boss Emma Hayes. “She chose the players, the staff, the environment, the playing style. You can’t get a bigger compliment than that from one of the best players in the world.”

Harder, UEFA’s player of the year in 2018, said: “The English league, it’s so exciting at the moment and I’m really looking forward to it.”

A familiar face to WSL and Manchester City fans alike, Lucy Bronze rejoined Gareth Taylor’s side on a free transfer following the expiry of her Lyon contract. While at the French club, she won three successive Champions League titles – the first English player of any gender to do so – and remains an integral part of the England set-up.

Like the men’s team, Man City are chasing that elusive Champions League trophy and are aiming to win their first WSL title since 2016 this season, agonisingly missing out last term after Chelsea were awarded it on points per game following the league’s cancellation. Bronze’s return will give them a huge boost in achieving those aims.

“I’m really happy to be back here at City,” Bronze said after her return to the club. “I always had it in my mind that I would return one day and it just feels like the perfect time and opportunity right now.

“I really enjoyed my time in France, but there were so many things that I missed and it’s great to be back. There’s nowhere I’d rather be right now than with Manchester City and I’m really excited to see what the future holds with the exciting squad we have here.”

The USA’s World Cup-winning midfielder will spend a year at Manchester City before returning to new National Women’s Soccer League club OL Reign and can’t wait to get started.

“The idea of playing in the Champions League and competing for so many different titles was really fun; I’m up for it and I think it’ll be a good time,” she said. “Man City is one of the best clubs in the world, both for the men and women’s side; they have so many resources for both teams so that was awesome.”

Lavelle was named the third best player at the 2019 World Cup, behind compatriot Megan Rapinoe and England’s Lucy Bronze. “I have big admiration for Lavelle,” Chelsea striker Beth England told Sky Sports. “I watched her in the World Cup and thought she was unbelievable. It’s exciting for the league; it’s going to be nice to see how she plays and adapts.”

Another star US midfielder, Sam Mewis, has signed a short-term deal with City after moving from NWSL North Carolina Courage. The 6-footer with 67 caps prides herself on her dribbling ability and aerial threat, having already made her debut in the Community Shield defeat to Chelsea.

“I’m really excited to see how I fit in with the group,” she told City’s website. “Maybe I’ll bring a bit of a unique style being American and having played a really high-pressure, attacking-oriented style in the last few years.”

The veteran USA international has joined Manchester United on a one-year deal from Portland Thorns, where she had played for the last six years. Prior to joining the Oregon-based side, Tobin Heath spent two years with PSG and was shortlisted for the 2019 Women’s Ballon D’or.

The winger has also been involved with the national team since 2008, winning two World Cups – and a runners-up spot in 2011 – two Olympic gold medals, four Algarve Cup titles and two SheBelieves trophies.

Manchester United manager Casey Stoney said: “She is an outstanding player who brings a wealth of experience to the squad. She is extremely skilful and possesses so much quality on the ball; her speed and intelligence in one vs one situations will be a real asset that will push the team forward this season, and I can’t wait to see her make her mark on the league.”

Christen Press has followed her USA team-mate to Manchester United, also penning a one-year contract. The forward has previous experience of playing in Europe, having feature for Swedish sides Goteborg and Tyreso FF, and also has a seasoned international career.

Press has earned 138 caps and scored 58 goals, with two World Cups and three SheBelieves Cup titles under her belt. She was also recently awarded the Golden Ball for best player at the 2020 CONCACAF Women’s Olympic Qualifying Championship, which was won by the USA.

Upon signing, she said: “I’m really excited to be joining Manchester United this season. I’m grateful to have the opportunity to play for such an elite club and beyond ready to get back on the field. I feel blessed to have the opportunity to continue to strive to be my best and to compete for trophies this year. I look forward to this new challenge and I can’t wait to start training with the team.”

Former England and Chelsea footballer Katie Chapman has called on players to have the confidence to take a break from the sport to have a child, without the fear of it ending their career.

Chapman says there needs to be more support for women who want to have children, having played on as a mother of three boys before her retirement from the sport at the end of the 2017-18 season.

The 38-year-old has previously publicly questioned the Football Association’s policy towards mothers in the international team after claiming her central contract was cancelled in 2010, during Hope Powell’s tenure, when she asked for time off to be with her family.

Chapman, who won 94 caps, was called up by England boss Mark Sampson for the 2015 Women’s World Cup in which the Lionesses achieved a bronze-medal finish, before winning her final cap in April 2016.

USA internationals are provided with support and assistance when they come back to playing after the birth of a child, which Chapman believes is vital.

Speaking on The Women’s Football Show, Chapman told Sky Sports: “It should be an option that if you do want to have a child within your career and the support to be there to get you back on your feet, because it shouldn’t be the end of a woman if they decide to have a child.

“Yes, there are complications and stuff that can go wrong. I had three great pregnancies and managed to get myself back after three, so with that support there you will see many more coming back if they do end up having a child.”