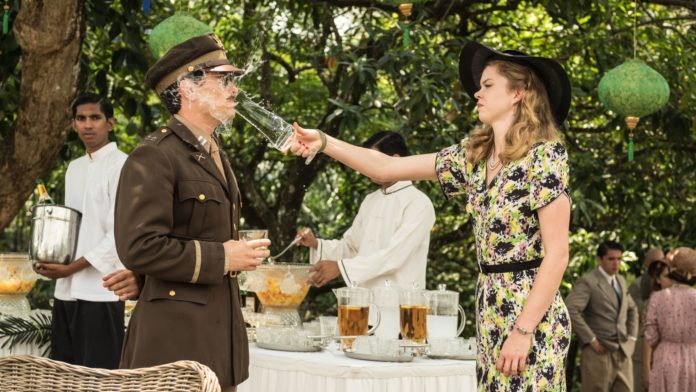 The latest Sunday night period drama from ITV has faced some criticism this week.

The Singapore Grip, based on JG Farrell’s 1978 book of the same name, is a big budget six-parter full of famous faces, including Charles Dance, Jane Horrocks and David Morrisey.

It is not even out yet, and the show has already come under fire for its portrayal of colonialism.

Advocacy group BEATS, which was founded by British East and South East Asians working in the arts, has described the show as “deeply upsetting” in a statement, and says the TV industry “regularly censors British East and South East Asians into a dehumanised, othered background presence, resulting in a lazily foreign, dramatically irrelevant homogeneity”.

Georgia Blizzard, who plays the daughter of a British businessman living in Singapore, told Sky News’ Backstage podcast she always expected the series to provoke conversation.

“It’s important to know that it’s a satire and it’s shining a really critical spotlight on Britain’s colonial past, and a part of Britain’s history that I think is important to acknowledge and maybe isn’t talked about a lot, and isn’t taught in schools a lot and isn’t depicted on screen a lot,” she said.

“It is showing that story through the lens of this wealthy British family and it’s definitely not putting them on a pedestal, none of it is showing them in a good light, really. It’s making fun of them and showing them for what they were – as these sort of arrogant, greedy, racist people.

“I don’t think that’s something that’s talked about a lot as part of history here, so yeah, I think it’s an important thing to acknowledge.”

Blizzard’s character Joan Blackett, while well-liked on the show, does not come across well to viewers. The actress said she enjoyed that dual aspect to the role.

“She is this sort of intoxicating mix of really charming and witty and intelligent, but also incredibly ruthless and arrogant and greedy, and as an actor it’s really fun to play,” she said.

Joan, after conspiring with her father, is set on marrying a man in order to protect the family business. Blizzard admits some of her character’s behaviour came as a surprise.

“When I first read the script I felt quite scandalised by some of the things she was doing. And I thought, oh my goodness, [it’s] 1940, let alone 2020, but yes, she’s quite bamboozling.

“When you think she’s gonna zig, she often zags – she’ll keep you on your toes.”

This is a first major UK role for Blizzard, who is from Australia.

“It’s funny for me, I suppose, because the show’s actually already come out in Australia, where all my friends and family are, so on the one hand I sort of feel like it’s already happened, and then on the other hand, it’s not even begun, so it’s been a weird sort of middle place at the moment,” she said.

“It was quite bizarre, at Sainsbury’s, I was flicking through the telly mags like, oh my gosh, we’re everywhere! It’s exciting, I think it’s going to spur some really interesting conversations, and I’m excited to see how people respond to it in all different ways.”

Responding to the criticism of the show in a statement, the programme’s writer, Sir Christopher Hampton, said any “fair-minded” viewers would “easily understand that The Singapore Grip is an attack on colonialism”.

He continued: “The most sympathetic and resourceful of the central characters is a Chinese woman, a member of the Resistance against the Japanese, who is able to educate our hero and open his eyes to what he is already becoming aware of, namely the corrupt practices and casual racism of the ruling British elite.”