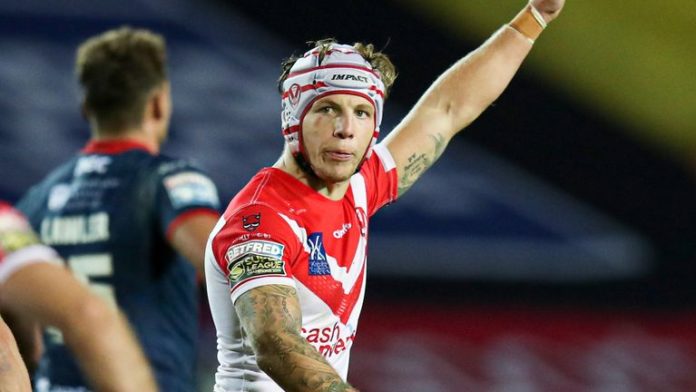 Theo Fages was the golden-point hero for St Helens as they extended their unbeaten run to six games with a 21-20 win over Hull Kingston Rovers in Friday’s first Super League game.

Having held out in the face of intense pressure in the first 20 minutes at the Totally Wicked Stadium, with Lachlan Coote’s penalty being all the hosts had to show for their efforts, Rovers went ahead with the first try of the match through Dean Hadley, but Regan Grace’s converted try put St Helens into an 8-6 lead at the break.

Tries from Jack Welsby and Alex Walmsley followed after the break. Yet the east Hull side hit back through Shaun Kenny-Dowall and Ethan Ryan, and were able to force extra-time thanks to Will Dagger’s penalty which also saw Kevin Naiqama sin-binned.

But, after Coote had seen a drop-goal effort go narrowly wide early in the golden-point period, French half-back Fages stepped up and slotted the game-clinching one-pointer to deny Rovers another shock win.

Saints, who were boosted by the return of Fages, second-rower Zeb Taia and captain James Roby, had no excuse for under-estimating their opponents after being pushed close by them only a fortnight ago in Warrington.

They were all over their visitors in the opening quarter but without finding the finishing touches to match their smart approach work.

The champions forced three goal-line drop-outs and benefited from several ‘six-again’ rulings, but forwards James Graham and Morgan Knowles both fumbled the ball near the Rovers tryline and stand-off Jonny Lomax had a try disallowed for obstruction.

Coote eventually put them ahead with a penalty goal but they were stunned on 24 minutes when Hull KR stand-off Jordan Abdull got loose-forward Hadley through a gap in their defence for the game’s first try.

Dagger added the goal to make it 6-2 but Saints struck back seven minutes before half-time when Lomax’s sharp pass got winger Grace over in the corner for his sixth try of the season.

Coote’s touchline conversion nudged his side back in front and his cut-out pass got winger Jack Welsby over for a second try two minutes into the second half.

Welsby was denied a second try when referee Jack Smith ruled the final pass from Coote forward and Hull KR were right back in it on 51 minutes when Saints failed to deal with Mikey Lewis’ high kick and centre Kenny-Dowall pounced on the loose ball for his side’s second try.

Normality was restored on the hour when Saints’ in-form England prop Walmsley, their unlikely leading tryscorer, went on one of his trademark charges and proved unstoppable from 10 metres out as he claimed his eighth touchdown of the season.

Coote’s fourth goal restored Saints’ eight-point lead but there was high drama to come. Right-winger Ryan produced a spectacular finish on 74 minutes to score Rovers’ third try and Dagger landed the touchline conversion to bring his side to within two points.

Dagger then maintained his composure by kicking a 40-metre angled penalty to level it after St Helens centre Naiqama was punished and shown a yellow card for a high tackle on centre Kane Linnett.

Full-back Coote had the first opportunity to seal the win in extra-time but his drop-goal attempt was adjudged wide and it was left to Fages to come up with the winner and finally sink their gallant opponents.