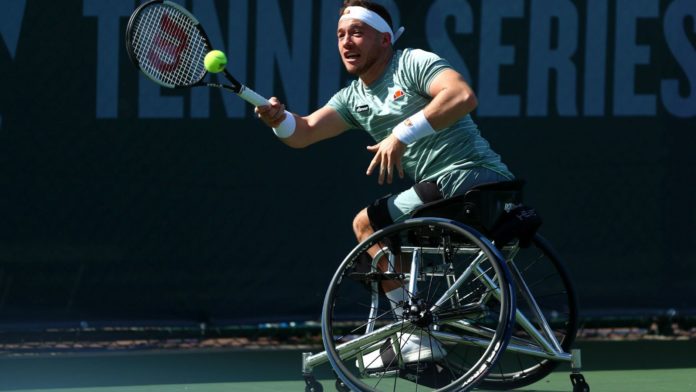 Britain’s Alfie Hewett will face top seed Shingo Kunieda in the final of the US Open wheelchair singles as he targets a third successive title.

“I definitely feel confident when I come here,” said Hewett, who also won the French Open singles title in 2017.

“I’ve only lost one match in four years here. Obviously, there’s something in New York that just clicks with me and, maybe now, anything that’s not a winner’s trophy is a disappointment.”

Hewett has also reached a fourth successive men’s doubles final at Flushing Meadows alongside compatriot Gordon Reid after the reigning Australian Open and US Open champions beat Fernandez and Kunieda 6-3 6-3.

Top seeds Hewett and Reid will now face Frenchmen Stephan Houdet and Nicolas Peifer, the same partnership they beat to win the first two of their three US Open titles in 2017 and 2018.

Fellow Brit Jordanne Whiley and her Japanese partner Yui Kamiji will bid for a second US Open title on Sunday after victory against Colombia’s Angelica Bernal and the USA’s Dana Mathewson 6-2 6-1.

They will face top seeds Marjolein Buis and Diede de Groot after their victory against Britain’s Lucy Shuker and her partner Momoko Ohtani of Japan 6-1 6-0.

In the quad competition, world No 2 Andy Lapthorne lost against top seed Dylan Alcott 6-1 7-6 (7-4) on Friday in the second of three round-robin matches for each player that will determine who goes into Sunday’s final.

The defeat means the Briton needs to beat Dutchman Sam Schroder on Saturday in order to progress to Sunday’s title decider against Alcott.

Lapthorne and Alcott will bid to retain their US Open doubles crown on Saturday when they face Schroder and David Wagner.