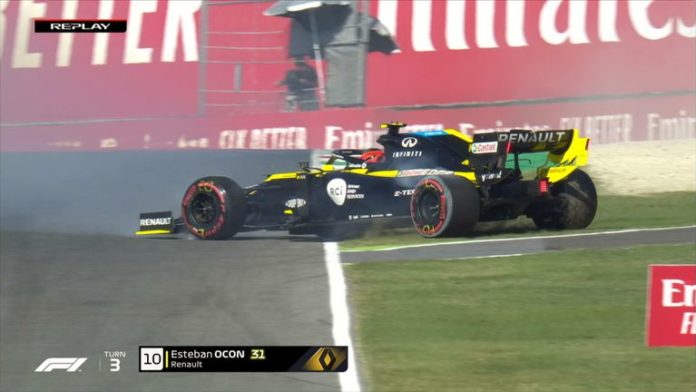 Behind Bottas all through practice? No problem for Hamilton, who edges out team-mate for 95th F1 pole; Leclerc returns Ferrari to top 10 in an unexpected fifth, but it’s another early exit for struggling Vettel; Monza winner Gasly out in Q1

Valtteri Bottas had topped all three practice sessions and repeated that result in Q1, but Hamilton yet again came to the fore when it mattered most for his 95th career pole.

After heading a closely-fought Q2 from Bottas and Verstappen, the six-time champion won out from his team-mate in the decisive final phase with a grid-topping lap of 1:15.144.

Bottas finished just 0.059s behind and lost a final chance on the final Q3 attempts to turn the tables when he had to slow down through the first sector for yellow flags after Renualt’s Esteban Ocon spun. Ahead of Ocon on the road, Hamilton wasn’t impacted by the caution flag and failed to improve on his final attempt.

“I still had more time in there,” rued Bottas. “Run one was OK, but not perfect. I was looking forward to the last lap but I didn’t get the opportunity.”

But Sky F1’s Paul Di Resta said: “If you want to beat Lewis Hamilton to a championship, you have to beat him on every lap when he’s on track. Valtteri didn’t get the job done.”

After a tough Monza, Red Bull have comfortably been Mercedes’ closest challenger here and for the first time this season have locked out the second row.

Verstappen returned to his habitual third place, having run Mercedes promisingly close in Q2, and his 0.365s deficit to pole is Red Bull’s closest of the season so far.

Red Bull’s race prospects could also be aided by Alex Albon taking an important fourth in the sister car. Discounting grid penalties, it is the London-born Thai driver’s best qualifying result in 30 F1 appearances after some tough Saturdays this season.

Ferrari back in the top 10 – with one car

Charles Leclerc was arguably the standout performer of the day with a fine – and unexpected – fifth place for struggling Ferrari. The team own the Mugello track and are celebrating a landmark 1,000th GP this weekend.

But that improvement for the Scuderia after a torrid Spa and Monza did not extend to Sebastian Vettel, who missed out on Q3 for the fifth consecutive race.

The four-time champion will start 14th, one place behind Kimi Raikkonen in the Alfa Romeo car which is powered by a customer Ferrari engine.

Arguably more of a surprise was the qualifying plight for F1’s newest race winner, Pierre Gasly. Six days after his stunning shock victory at Monza, the AlphaTauri driver dropped out in Q1 and will start 16th.

McLaren’s Lando Norris, meanwhile, also missed out on the top 10 for the first time this season and slips behind team-mate Carlos Sainz in their ever-tight qualifying head-to-head after the Spaniard took ninth.

Racing Point locked out row three ahead of Renault’s eighth-placed Daniel Ricciardo, although Sergio Perez and Lance Stroll will switch position from where they qualified after the former collected a one-place grid drop on Friday for colliding with Raikkonen in second practice.

Despite Hamilton dominating the championship, Bottas has tended to be the Mercedes driver who has started fastest in opening practice sessions so far this season.

That Friday/Saturday morning advantage was even more pronounced for the Finn as the field got up to speed around fast and relentless Mugello as he completed a hat-trick of fastest times ahead of Hamilton, who had admitted after P2 that he was not at yet completely at the car’s best.

Reflecting on his journey to an eventful pole, Hamilton said: “It’s been a really tough weekend if I’m being honest.

“This track is phenomenal. It’s a really, really challenging circuit, and Valtteri was quicker than me all through yesterday, this morning, and even in Q1.

“I’ve been working so hard in the background to try and improve. The team did such a great job and I finally got the lap that I needed. I couldn’t go quicker at the end, but it was job done.

“Valtteri did a great job pushing me, but I’m really, really happy [to be on pole].”

Mercedes have now claimed seven front-row lockouts in a row, two adrift of their own F1 record, but Verstappen and Red Bull’s presence and pace could make for a more challenging Sunday afternoon, with the RB16 generally stronger over a race distance.

“I think overall this weekend has been really promising, we have bounced back well from Monza,” said Verstappen. “To be third in qualifying, we can be very happy with that.”

*one-place grid penalty to be applied