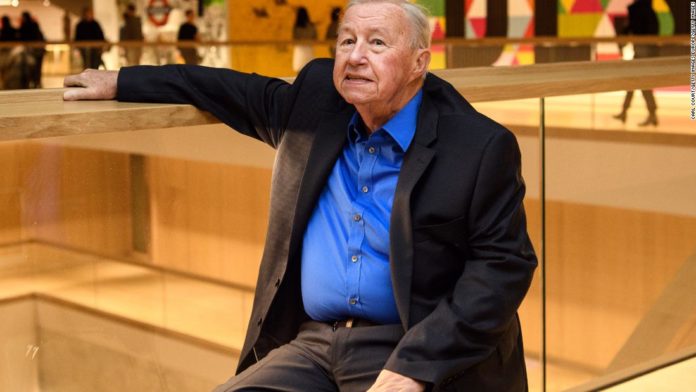 British designer and businessman Terence Conran has died at the age of 88.

Conran, who founded the Design Museum in London in 1989, “passed away peacefully” at home on Saturday, according to a family statement.

“He was a visionary who enjoyed an extraordinary life and career that revolutionised the way we live in Britain,” the statement said.

“In his private life he was adored by his family and friends and we will miss him dearly,” it added.

The Design Museum also paid tribute to Conran, saying he “had a greater impact than any other designer of his generation” through “a series of parallel careers.”

After studying textile design in London and establishing a workshop with the artist Eduardo Paolozzi, Conran founded Habitat in 1964, which went on to become a national and international chain.

Eight years later, the designer opened the first Conran Shop, before launching stores in cities including Paris and New York.

As well as successes in retail and design, Conran was a renowned restaurateur, with interests stretching around the globe.

Peter Mandelson, Chairman of the Board of Trustees at the Design Museum, was among those who paid their respects to the designer.

“Terence Conran has filled our lives for generations with ideas, innovation and brilliant design. He is one of the most iconic figures of post war Britain,” he said.

The Design Museum, which moved to Kensington, west London in 2016, has received over 7 million visitors and has put on more than 100 exhibitions, showcasing the work of designers and architects including Paul Smith, Zaha Hadid and Frank Gehry.

Terence Conran is pictured at the launch of an exhibition of his work at the Design Museum, London on November 15, 2011. Credit: CARL COURT/AFP/AFP via Getty Images

Founding this museum was “one of his proudest moments,” Conran’s family said in a statement after his death.

Conran’s five children from his four different marriages have all followed in their father’s footsteps by pursuing careers in the creative industries.