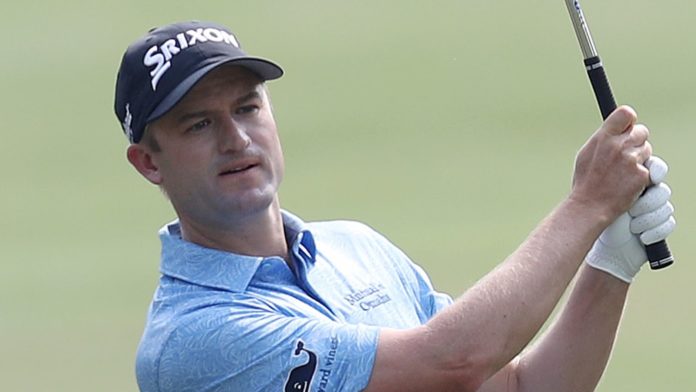 Russell Knox stayed in contention for his first PGA Tour win in over four years as a 70 was enough to keep him two shots off the lead on day three of the Safeway Open.

Knox birdied two of the first three holes at Silverado Country Club, although he was unable to make any further gains and settled for 15 consecutive pars to remain on 14 under amid a hugely-congested leaderboard.

Brian Stuard, James Hahn and Cameron Percy share the lead on 16 under, with the top 28 players separated by only four shots heading into Sunday’s final round.

Stuard (66) and Hahn (67) both kept bogeys off their cards on day three, while Australian Percy mixed six birdies with two dropped shots in his 68 as he bids for his maiden PGA Tour title at the age of 46.

Norway’s Kristoffer Ventura made a significant early move up the leaderboard, pitching in for eagle at the ninth to cap an outward 30, and he was the first to get to 16 under when he holed a 10-foot birdie putt at the short 11th, only to have his momentum halted with bogeys at 13 and 15.

He clawed one shot back at the last to complete a 66 and set the clubhouse target at 15 under, a score later matched by overnight-leader Sam Burns (72) and Friday’s albatross star Harry Higgs (70).

Emiliano Grillo, the 2015 champion, surged into contention for a second win in Napa Valley as he birdied four of the last five holes to return a 65 along with veteran Stewart Cink.

The 2009 Open champion made six birdies as he also covered the front nine in just 30 blows, although a birdie at the 12th was his only gain after the turn as he equalled Grillo’s 65 and joined the Argentine on 14 under.

“I did start off hot, I don’t know how else to describe it,” said Cink, who admitted taking three to get down from just short of the green at the par-five ninth took the wind out of his sails.

“I was just in front of the green in two and I hit kind of an indifferent third shot to about 10 feet and didn’t make the putt, and that was just a little bit of a momentum staller. And then after that I was still pushing. I made one more birdie, but I just couldn’t get anything stuffed in there close and couldn’t get any putts to fall.

“All in all, though, it was a round I’m really pleased with.”

Knox missed a number of chances from inside 15 feet to add to his two early birdies, while England’s Ben Taylor fired a six-birdie 67 to ensure he will start the final round just three shots off the lead.