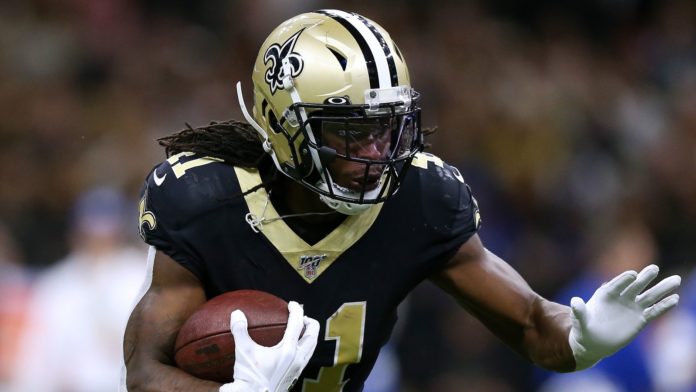 Running back Alvin Kamara and the New Orleans Saints have reached agreement on a five-year, $75 million extension, according to the NFL Network’s Ian Rapoport.

The 25-year-old back is reportedly due $77.13 million total, with a $15 million signing bonus, in a deal that keeps him in New Orleans through the 2025 season.

His new contract puts him just behind Carolina Panthers running back Christian McCaffrey in terms of annual value. McCaffrey signed a four-year, $64 million extension in April that will average at $16 million per season.

Kamara rushed for 797 yards and added career lows in receiving yards (533) and total touchdowns (six) last season while being hampered by knee and ankle injuries.

The Vikings didn’t release contract terms, but Rapoport and Tom Pelissero have said it is a five-year, $63 million deal that includes a guarantee of more than $28 million.

Last month, contract talks broke off between the two sides as Cook entered the final year of the four-year, $6.35 million contract he signed after the Vikings selected him in the second round of the 2017 NFL Draft. The extension ensures that Cook won’t have to play under the franchise tag in 2021.

Cook, aged 25 like Kamara, played in a career-high 14 games last season, rushing for 1,135 yards and 13 touchdowns. He also had 53 receptions out of the backfield while earning Pro Bowl honors.

Los Angeles Rams receiver Cooper Kupp was another to sign a new deal with his team on Saturday, signing a three-year contract extension through 2023.

Kupp has been a steady, productive receiver since the Rams chose him in the third round of the 2017 draft. He was Los Angeles’ top pass-catcher last season, leading the team with 94 receptions for 1,161 yards and 10 touchdowns.

The deal wraps up another important piece of offseason business for the Rams, who gave a five-year, $105 million extension to star cornerback Jalen Ramsey earlier this week.

On the latest Inside the Huddle podcast – which you can listen to in the player above – Neil Reynolds, Rob Ryan and Jeff Reinebold pick out 10 players in new surroundings for the 2020 season and debate whether they will be hits or misses.