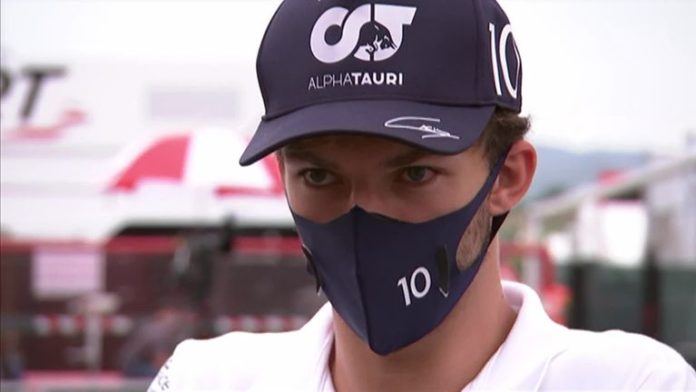 Another young driver switch? A move for free agent Perez? Horner responds to the latest questions on the Red Bull’s plans

Suggestions that the team could consider reversing the decision made in August 2019, when Gasly was demoted to AlphaTauri (then Toro Rosso) and Albon promoted in his place next to Max Verstappen, has been mooted owing to the former’s form this season – headlined by a shock maiden win at Monza last week.

But Red Bull have given no indication that they are considering switching the two young drivers again and, speaking at the Tuscan GP, Horner expanded on the reasons why.

“I think that as far as Red Bull Racing’s seats are concerned we are focused on Alex Albon, we want to try and give him the best opportunity to retain that seat,” said Horner, at an event in which Albon has qualified a season-best fourth on an all-Red Bull second row.

“We’ve got some issues that we are working on with the car and I think that it wouldn’t make sense to switch the drivers back.

“AlphaTauri is now a sister team rather than a junior team. I think that Franz [Tost] is happy, I believe, with Pierre, so there’s no…

“The final decision will be made later in the year but there’s no push from our side to reverse the situation.”

Perez? Could Red Bull look beyond their stable?

The last seven drivers to join the senior Red Bull squad – Albon, Gasly, Verstappen, Daniil Kvyat, Daniel Ricciardo and Sebastian Vettel – were all graduates of the company’s hugely-successful junior team and took their first steps in F1 with what was Toro Rosso.

Red Bull have not hired a driver from outside their programme since 2007, when a 30-year-old Mark Webber joined from Williams.

The experienced and consistent Sergio Perez is now on the market after being let go by Racing Point for 2021 but a move for the eight-time podium finisher also appears unlikely.

Asked if the Mexican could be a contender, Horner replied: “I think our preference has always been to nurture talent and whether that’s Sebastian Vettel, whether that’s Daniel Ricciardo, whether that’s Max Verstappen, they’ve all come through the junior programme.

“They’ve been schooled by Franz and then they’ve obviously delivered very well in Red Bull Racing seats, so our preference is always in that home ground talent but if the pool isn’t big enough, then of course occasionally you have to look outside of it but our intention is absolutely to work with the talent pool that we have.”

The view of Sky F1’s Martin Brundle
“They really want it to work with Alex Albon, they don’t seem to be considering putting Pierre Gasly back in and making a U-turn on that. They will give Albon a bit longer yet before they make a decision on what to do next.”