Home Sport Hits and misses: Liverpool on the defensive 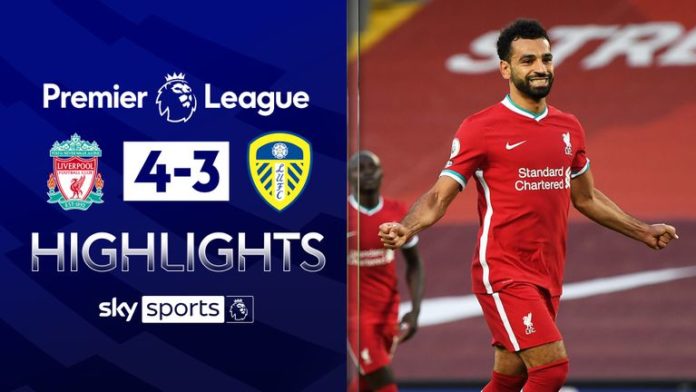 Analysing the opening day of the Premier League season, with Arsenal maintaining their upward curve and Leeds impressing even in defeat at champions Liverpool…

The champions found a way, but only just!

Ahead of their season-opener against Leeds, Jurgen Klopp promised Liverpool would “attack” their Premier League title defence and they certainly lived up to those words in their 4-3 victory. Mohamed Salah’s hat-trick eventually sealed victory, but it could not disguise the problems Klopp’s side have at the back.

Trent Alexander-Arnold and Joe Gomez were exposed on a number of occasions by Leeds, while the usually reliable Virgil van Dijk produced a costly error as once again the defensive frailties that had crept in towards the end of last season were exposed. Liverpool have now conceded 3+ goals in back-to-back home league games for the first time since September 1982 and Klopp knows his defenders must improve if they are to retain the title.

From hero to villain! Van Dijk nonchalantly tries to bring down an innocuous long ball but gifts it to Bamford! 🎁

“It is pretty rare you see that many goals in a game, we have left space for improvement in our defending but that is not unusual for a first game. The opponent forced us to make mistakes, we can do better, we will do better.”

But will that improvement come from the players already has at his disposal? Or will the German be forced into the transfer market to inject some new blood into his back line?

Liverpool are already a centre-back down after Dejan Lovren’s departure this summer, but Klopp insisted before the game he had enough options at centre-back, even talking up Fabinho in the role. However, Liverpool’s defensive performance in the season opener may have changed his mind.
Oli Yew

Arsenal might be coming into this campaign off the back of their worst Premier League finish in a quarter of a century but that does not accurately reflect the atmosphere surrounding the club. It is not just that Mikel Arteta delivered the FA Cup last month. The more significant reason for optimism is that the Gunners look so much better than before.

Arteta’s team certainly had too much for Fulham at Craven Cottage. Their 3-0 win on Saturday showcased the attacking potency that might be expected of a team that includes Pierre-Emerick Aubameyang, scorer of the third goal, and has been bolstered by the acquisition of Willian. The Brazilian was instrumental in all three Arsenal goals.

But what really has supporters excited is that there is a pattern of play now. Arteta has his team organised in a new 3-4-3 formation with new signing Gabriel hugely impressive at the heart of defence. Fulham barely registered a chance after the second minute of the match.

There will be trickier challenges but that is hardly the point. Arsenal have made a mess of such matches in the past. That looks less likely now. Arteta’s ideas appear to be taking shape.
Adam Bate

No fear factor for Leeds

“We are not going to lie down,” Marcelo Bielsa told Sky Sports as the curtain opened on Leeds United’s big night back at the elite of English football after 16 long years.

It would be easy to summarise the subsequent 4-3 defeat at Liverpool as Leeds’ introduction to the realities of the Premier League. But after such a rousing display from the newly-promoted side, this felt more like the Premier League’s introduction to Bielsa. Three times they fell behind and three times they equalised. Only Mohamed Salah’s hat-trick goal, his second penalty of the match, scored with just minutes remaining, proved too much.

It was the verve of the performance, their approach to the challenge before them, that stood out. Not many teams travel to Anfield and go toe-to-toe. Punches were traded. Gaps were left at the back. It was risk-reward football at its finest. They will be box-office this season.
Adam Bate

Two goals from two debutants and three points – opening days don’t come much better than that as far as Newcastle are concerned.

After eight years without a win on the opening day, summer signings Callum Wilson and Jeff Hendrick sealed a thoroughly-deserved victory at West Ham that vindicated all of the pre-season fuss surrounding Steve Bruce’s side.

Newcastle have always been secure and steady under Bruce’s watch, but in Wilson, the ever-exciting Allan Saint-Maximin and a revitalised Andy Carroll, they now possess the firepower to match.

The heartache from yet another failed takeover is now a distant memory, and the hope harnessed by a summer of spending looks to have blossomed into the kind of reality Newcastle fans until previously only dared dream of.
Jack Wilkinson

Wilfried Zaha netted the 50th league goal of his career as Crystal Palace overcame Southampton, but you wonder how many more he will score in the blue and red of his boyhood club. The winger needed 13 games to get off the mark last season, but achieved the feat after only 13 minutes at Selhurst Park and it was enough to give Roy Hodgson’s men a 1-0 win.

Zaha’s influence on Palace since their return to the top flight seven years ago is unrivalled: directly involved in 60 Premier League goals, 28 more than any other player for the club in the competition. But with every addition to that tally during the window, a familiar question will be asked: Is Zaha going to remain at Selhurst Park?

“We certainly hope so,” said Hodgson. “Every transfer window I’ve been involved in, Wilf has made noises that he would perhaps like to play for a club that can offer him Champions League football and maybe a step up in his career because he’s given a large part of his career to us and we’re grateful for it.

“But for that to happen, that club has to come along and pay the market price. Until such a time as that happens I’m happy to continue working with him and I’m expecting him to understand that we can’t let him go until that club comes in and wants to buy him.”

The spotlight has been focused elsewhere during the summer transfer window, and while Hodgson stressed the signing of Ebere Eze was not designed as a replacement for the Ivorian, you do wonder whether the opening weekend of the campaign witnessed the changing of the guard.
Ben Grounds

Moyes has mountain to scale at West Ham

David Moyes didn’t mince his words after West Ham’s opening-day defeat to Newcastle. It was a performance that would have brought the Hammers back down to earth, had they not already been on the ground after a pre-season of unrest.

The fallout from the sale of promising youngster Grady Diangana to West Brom, coupled with lack of incoming transfers, threatened to unravel any plans Moyes had been able to formulate in the six short weeks before the start of this season and the end of last, and that’s exactly how it proved.

As Newcastle’s new signings fired them to victory on the opening day for the first time since 2012, the Hammers were left to mull over a fourth straight first-day defeat without scoring a goal.

West Ham’s board came under fire from captain Mark Noble and a small group of fans ahead of kick-off. If performances continue in this vain, Moyes will soon be in the firing line, if he isn’t already.
Jack Wilkinson

Fulham will have more winnable games this season, but on first look, they’ll need a degree of good fortune to survive come May.

Arsenal came assured, disciplined and energetic, winning in every area of the pitch as Scott Parker got that expected dose of reality on day one. Was it a case of Arsenal too good, or Fulham poor? It was both.

There are reasons to be encouraged; Arsenal’s opener came against the run of play, and there is obvious quality in Parker’s side, but they were slow in transition and struggled to get numbers in the box when their wide men had opportunities to deliver. Of Fulham’s 11 crosses, only three reached their target.

Defensively, they stood off Arsenal too often – there won’t be a more straightforward debut than Willian’s this season – but none of this will be news to Parker, who knows how difficult this season will be.

Unlike in 2018, Fulham have kept the majority of their promotion side, with only one change to the starting line-up from the Play-Off final win over Brentford. More sustainable? Perhaps, but there’s no safe formula for survival.
Gerard Brand

Saints slow out of the blocks again

It was a frustrating afternoon for Southampton in SE25 as despite enjoying 70 per cent possession, the visitors were consigned to another defeat on the opening day.

The Saints have won just one of their last 14 Premier League season openers – failing to win any of the last seven such games (losing three) – and Ralph Hasenhuttl admitted afterwards their latest disappointment came as a result of lacking a “clinical” edge.

“We created enough chances but sometimes the finishing wasn’t good enough,” the Southampton boss said. “We had to spin the wheel a little quicker and have a little bit more pressure. We know Palace do well to break your rhythm and can be very passive. It’s nothing new but we didn’t have the best tools.”

Southampton have the worst win percentage on matchday one in the competition, winning just two out of 22, and Hasenhuttl revealed he will use Wednesday’s Carabao Cup game with Brentford as an opportunity to build match fitness after an unusually short pre-season ahead of facing Tottenham next weekend.

On Saturday, Stuart Armstrong’s ingenuity was missed, and the Saints boss says will continue to actively seek reinforcements in the final few weeks of the window.

He added: “We know there are definitely a few positions where we have to look for alternatives and it would be good to get players in who can play in more positions but there are limits.”
Ben Grounds