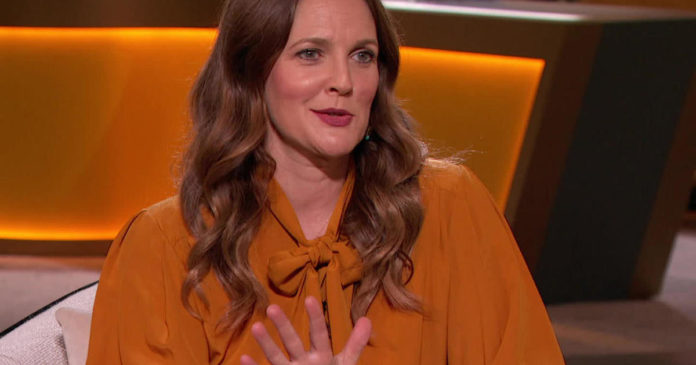 As correspondent Lee Cowan sat down across from the actress and, soon, host of “The Drew Barrymore Show,” he said, “I don’t know if you’re interviewing me or I’m interviewing you. I’m not really sure.”

“And hopefully, we’ll never know,” said Barrymore, “because it will be an unguarded, respectful conversation.”

Drew Barrymore is all about conversation these days. Starting tomorrow, she’ll be doing a lot of it, debuting her very own talk show on CBS, from a studio just down the hall from “CBS Sunday Morning.”

Cowan was a little envious – her studio is a lot bigger. She even has her own kitchen.

“Are you a cook?” Cowan asked.

“I am. But I’m not, like, sexy and cute and cool while I cook. I look like blablablhablhablhab!“

As you might imagine, launching a talk show during a pandemic is hardly optimal. Her planned studio audience has been replaced with a virtual one.

And for guests who can’t sit with Barrymore in person, thanks to the magic of television, they can appear to be sitting there anyway, from a studio on the other side of the country.

“We’ve gone through so many moments since filming the pilot a year ago, that this show probably wasn’t likely gonna happen,” she said.

Oddly, all the challenges, she said, just might have made the show better.  She’s not hiding from this awful year. Instead she’s meeting it head-on with what she calls “intelligent optimism.”

“I’m not a total Pollyanna,” Barrymore said. “I get that there is a huge divide. I don’t wanna pretend that there isn’t. But I would rather find the things we have in common than harp on our differences.”

Talk shows are certainly in her wheelhouse; her first appearance on one was at age seven, on “The Tonight Show Starring Johnny Carson.”

As she grew, so did her talk show acumen; she never failed to disappoint. David Letterman probably still hasn’t forgotten when, in 1995, the 20-year-old Barrymore danced on his desk and flashed him.

She told Cowan, “I think if there’s one thing I’ve learned in a very long life in front of people is there is a line. There is TMI. And I kind of know what that line is, and it’s a feeling.”

Cowan asked, “Have you talked to David Letterman or Jimmy Fallon or anybody about, you know, how do you do this and what’s the secret sauce?”

“All of the above, actually, yes”

“Is there one thread of advice that they all have that’s the same?”

“They all say pace yourself, she replied, “which, of course, I in my stubbornness was like, I’ve been working since I was 11 months old! You don’t even know my work ethic.”

TV commercials came before she could talk – but it was a scream that got her noticed.  Her role as Gertie opposite the world’s cutest alien made her a galactic sensation. Problem was, she was just as cute as E.T. himself, and for a while that’s all anyone wanted to talk about.

“Is there one thing you’ve never been asked about ‘E.T.’?” Cowan laughed.

When she did emerge from ‘E.T.”s shadow, she was no longer that innocent little girl. Barrymore largely skipped childhood, turning to drugs, drinking and rehab; she even attempted suicide.

She lived a lifetime before she was 14, when she was legally emancipated from her abusive alcoholic father, and her troubled manager-mother.

Cowan asked, “When you look back at, like, those days in court when you were emancipated, do you see an adult there?”

“I see someone who knew that I probably was all I had,” she replied. “So, it was like, you figure it out or, you know, you’re gonna go the way of the cliché, as they say.”

It was pre-ordained, if you believe bloodlines carry a storyline, too.  The Barrymores were a hard-partying Hollywood dynasty. She’s the great-niece of Lionel and Ethel Barrymore, and her grandfather was the great John Barrymore. All had reputations that Drew knew all too well.

“I pushed the limits a lot, many different times in my life,” she said. “And I’m very lucky, I know that. I tested, I pushed, probably too far many a time.”

“But you always came back to the center, somewhere?” Cowan asked.

“I at least tried to meet that blessing with having learned something.”

When she was only 20 she co-founded her own production company, Flower Films, which soon had her starring in, and producing, films like “Charlie’s Angels.” She dove into business, too, with a successful cosmetics line, Flower Beauty, and more recently a furniture and clothing line as well.

Barrymore said, “I’ve also had my career go away at, like, 13. I mean, if that doesn’t give you some perspective and gratitude for every job you get, nothing will. I’m like, I am working!! This is amazing!!“

All of it while raising her two young girls, Olive and Frankie, whom she had with ex-husband Will Kopelman.

“I wanna be all about, you know, the pillars of appropriateness and decorum,” Barrymore said. “And I don’t lie to my kids. I’m, like, I had to find my way here. So, yeah, I’ve lived a lot of different lives, and this is what’s important to me now. But, my kids have inspired me to be the best person I have ever been in my life, and I thank them every single day for that.”

She knows daytime is a crowded time slot, and talk shows come and go. But if Drew Barrymore has proven anything in her 45 years, it’s that her superpower is her staying power.

“I know I’m making a show for other people,” she said. “So, whether they’re right here in this room or watching, hopefully, somewhere, then this is for them, for sure. I’m not doing this for myself!”=

To watch a trailer for “The Drew Barrymore Show,” click on the video player below: