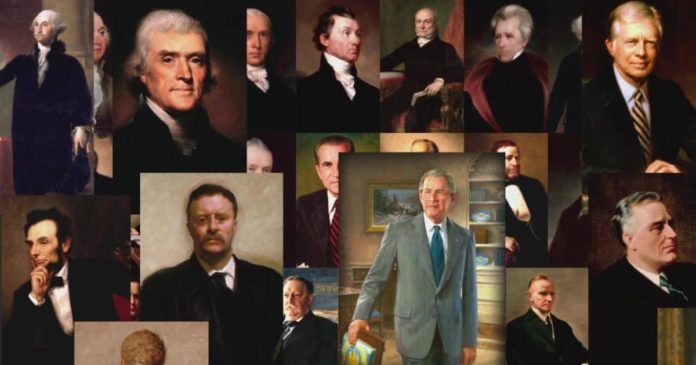 Perhaps you’ve heard of the “Ex-Presidents Club”? Well on May 31, 2012, John Howard Sanden became a member of another group that’s almost as exclusive: the artists who’ve painted those presidents.

Sanden is a sought-after portrait artist (The New Yorker once called him “the man who makes moguls look good”), but there was a gaping hole in his otherwise impressive portfolio.

“I’d been doing portraiture at that point for 40 years,” Sanden told correspondent Mo Rocca. “And I thought, well, I would love to have done a president. Because, see, in my profession, that’s the highest honor. There’s nothing above that.”

“But you had thought, ‘It’s not gonna happen’?” Rocca asked.

“Yeah, I had assumed that. And then, he called.”

It took Sanden 13 months and eight tries, before his portrait of President George W. Bush became one of just 42 official presidential portraits in the White House collection.

He recalled the ceremonial unveiling: “All my life I’d heard, when the president comes in, they play ruffles and flourishes and ‘Hail to the Chief.’ And there it was! President and Mrs. Bush senior were there. We sat right behind the Obamas. He was very gracious to us.  When someone would say something about the painting, he would turn and nod to me.”

Rocca asked, “That moment when the paintings were unveiled, what were you feeling?”

“Well, you were scared!” Sanden laughed. “Because, you know, everybody in the audience is sitting there, bracing, you know, how awful is this gonna be?“

“And once everyone started applauding?”

“You feel a gigantic feeling of relief,” he replied.

At the unveiling, President Bush said, “I am pleased that my portrait brings an interesting symmetry to the White House collection. It now starts, and ends, with a George W!”

Painted over a period of more than 220 years, some of these presidential portraits evoke Napoleonic grandeur; others, everyday approachability.

John Singer Sargent’s portrait of Teddy Roosevelt looks you confidently in the eye.

Back in 2014, then-White House curator Bill Allman showed Rocca the first picture of a president to hang in these hallowed halls: Gilbert Stuart’s iconic 1797 portrait of George Washington. Hanging in the East Room, it’s played background during some of the most memorable moments in modern American history.

But this treasure was almost lost. During the War of 1812, Dolley Madison and an enslaved man named Paul Jennings managed to take the eight-by-five-foot portrait with them as they fled the White House, shortly before it was burned by British troops.

“This thing is really big; it’s not you could just go Whoosh! and run out with it,” said Rocca.

Allman said, “Now it hangs on a wire; you could actually pick it up if you had enough strength. But back then, it was bolted to the wall. So, that’s when they had to actually chop the frame open and take the painting out on its stretcher.”

The painting would return to the rebuilt White House after the war. But it was decades before anyone would think to hang another presidential portrait.

“It was considered a home, and it really wasn’t treated quite as a place to revere the people who had come in the job before you,” Allman said. “By 1857, when they decided to commission portraits of some of the missing presidents, sensibilities had changed a little bit with the idea that the White House could become something of a public attraction and historic site.”

Boston-born artist George P.A. Healy painted the portrait of Abraham Lincoln, which hangs above the mantel in the State Dining Room.

In 1962 first lady Jacqueline Kennedy highlighted that portrait during her televised tour of the White House, which she described as the most famous of them all. “Healy was a contemporary of Lincoln, but he only saw him once, so he painted this picture from photographs,” she said.

Nine years later, President and Mrs. Nixon hosted Mrs. Kennedy and her children for a private unveiling of the portraits of herself and her late husband. It was the only time she returned to the White House after his assassination. Those portraits, both by Aaron Shikler, were controversial when they first arrived, but now are among the most popular in the entire collection.

Over the last three decades, the public unveiling of an official presidential portrait has become something of an event in Washington – the former occupant invited back for a light-hearted, often bipartisan affair.

President Bill Clinton hosted George H.W. Bush just two years after defeating him. “Perhaps the most important thing I could say to President and Mrs. Bush today is, ‘Welcome home,'” he said.

President George W. Bush did the same, welcoming the Clintons back when their portraits, painted by artist Simmie Knox, were added to the White House collection in 2004.

Eight years later, it was President George W. Bush’s turn to come home. “We may have our differences politically,” President Barack Obama said, “but the presidency transcends those differences.”

With the portrait of George Washington presiding over the proceedings, Mr. Bush said, “Dolley Madison famously saved this portrait of the first George W. Now, Michelle,” he said, pointing to his own portrait, “if anything happens, there’s your man!”

But the future of this tradition is in doubt. An unveiling ceremony for the Obamas’ official portraits at the Trump White House has yet to be scheduled.

As for John Howard Sanden, he is still painting presidents. He says even in the age of the digital camera, a great portrait captures something that an iPhone never will.

“Everybody, every human being develops an image of himself, a self-image,” he said. “And it’s not necessarily what people in your household see every day. It’s something other than that. The portrait painter’s goal, his ultimate goal, is to discern what that self-image is.”