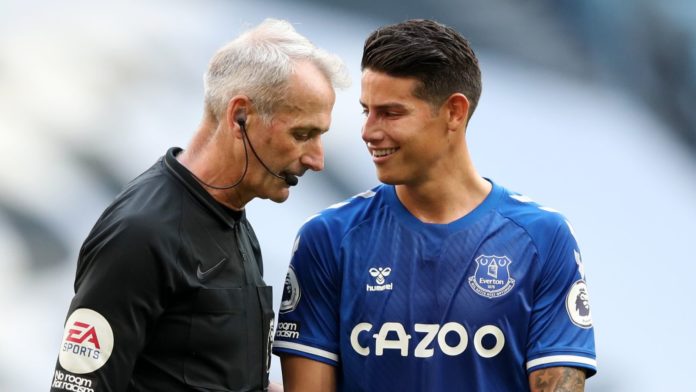 By Peter Gill and Ben Grounds

Could not do anything about Everton’s winner.

Self-created a wonderful chance to almost cap his Spurs debut with a goal, injecting a rare dose of pace and urgency into the home side’s attacking. But, as identified during the second half, his back-foot play is a cause for concern – and vulnerability – and the debutant was substituted after 75 minutes.

Made to look very slow by Richarlison’s early break through on goal and spent much of his afternoon struggling to contain Everton’s pacy runs.

Beaten emphatically by Dominic Calvert-Lewin for Everton’s opening goal. If he wants to make a success of his shift to centre-half, those are the duels he has to win – or at least not lose so comprehensively.

Struggled to get to grips with James Rodriguez and fortunate that Richarlison made a hash of his finish after collecting the left-back’s errant cross-field waft.

Did not click with Winks in a midfield partnership which, as feared beforehand, lacked pace and creativity and suffered, in the words of Sky Sports’ Gary Neville, “a quiet nightmare”. Loses a mark for rolling around after committing the foul on Richarlison which rightly saw him cautioned late on.

Is it unreasonable to have wanted and expected more? Did not supply the zip and verve Tottenham’s pedestrian spells of possession were crying out for. There was no surprise when he was hauled off after an hour.

There cannot have been much in Moura’s favour when Jose Mourinho was deliberating at half-time about what changes to make to his team line-up. The lone caveat of note was Moura’s first-half deployment in an unfamiliar and perhaps uncomfortable wide-right role. Shifted centrally for the second half but, one run and one long-range header aside, remained largely anonymous.

Was he injured? If he was not, and Alli was hauled off at half-time on the opening weekend of the season when fully fit, there are going to be a lot of questions asked about the forward’s future over the next few weeks.

As usual, Tottenham’s brightest attacking spark, but could not quite find an incisive final ball and his set-piece delivery verged on the dreadful.

Just what was going through the England’s captain mind during Spurs’ desperately disappointing afternoon. Starved of possession, his biggest achievement was not letting any understandable frustration boil to the surface, but it said everything about his isolation that his first touch in the Everton penalty box occurred as late as the 80th minute.

Tottenham’s best midfielder after his half-time introduction. But there was not exactly a lot of competition.

Injected some welcome pace but could not make any sort of meaningful impact.

Given just 15 minutes as Tottenham rolled the dice and desperately sought a shape that made a form.

England’s No 1 made a brilliant save to deny Alli on a Spurs counter-attack after 33 minutes. An even better stop denied Doherty with his feet before the break. Showed presence inside his box to twice punch clear under pressure as Spurs came on strong. Could be heard throughout the game bellowing at his players.

Was kept busy by Son with James Rodriguez positioning himself high up the field. Made an important headed block to prevent Son’s curling effort. The old school benefiting from the new, Coleman tried his luck with an audacious dipping half volley in the second half, forcing Lloris to watch it all the way.

Was caught on his heels a little as Kane was afforded too much space to find Doherty for Spurs’ major chance of the first half. With Mason Holgate out injured for up to six weeks, he will want to make the centre-half berth alongside Keane his own, and he did his chances no harm against England’s leading man.

Nearly punished by Kane having switched off at the far post from Son’s first-half cross. Made important clearances as Tottenham came on strong towards the end of the opening period.

Did not follow Doherty’s run which led to Pickford’s vital save before the break. Was Everton’s most used out-ball with the Frenchman having more touches (90), making more passes (63) and attempting more crosses (7) than any of his team-mates. Peach of a cross for Dominic Calvert-Lewin’s opener.

Won the ball and recycled it on numerous occasions as he lived up to his ‘bulldog’ moniker. Everton have not had a player like this since Idrissa Gueye and, with their powder-puff midfield fortified, Carlo Ancelotti will be encouraged by this first outing. Did the simple things so effectively and, single-handedly, looks like he has brought the necessary culture change.

Snapped into challenges to regain the ball for his side and was well positioned defensively to hurry Alli’s first-half attempt. Won all four of his first-half duels. His presence will allow the likes of Gylfi Sigurdsson, Tom Davies and Andre Gomes to play their natural game this season.

The Portuguese was allowed far more freedom with Doucoure and Allan behind him. Tidy in possession, completing 37 of his 39 passes (94.9 per cent). Replaced in the 68th minute having been deemed a doubt before the game.

Bright on the ball, cutting in from the right onto his left foot as Davies was given a stiff opening-day assignment. Having found his range and growing in influence, the Colombian had Lloris sprawling across his goal with another fine left-foot effort that veered just wide.

Snatched at a good chance early in the second period. But, with pictures in his head, he will warm the hearts of Evertonians. Made five key passes and his left foot cutting in from the right provides Everton with something they have rarely had in the Premier League era.

Missed a gift of an opening as he spurned the chance to put Everton in front as he latched onto Davies’ error and rounded Lloris, but lost his composure at the vital moment to lift his shot over from an acute angle. Almost had too much time to decide with Calvert-Lewin free for the pull-back. Did not let it affect his game, coming close to a second against a lifeless Spurs.

Having failed to score in the 10 games towards the end of last season, was quietly effective as Everton’s focal point in the opening 45 minutes against an uncertain Spurs back-line. Nine minutes into the second period, he rose superbly to score a deserved opener. With Duncan Ferguson on the sidelines, it was straight out of the Scot’s ‘School of Heading’ manual.

With Gomes tiring, allowed his side to continue to control the midfield. Lost possession on two occasions in quick succession but Allan ensured it did not prove costly.

Introduced in the final two minutes of normal time for Calvert-Lewin to operate on the left side with Richarlison pushed through the centre.

Brought on in the 92nd minute, as Everton sought to see out the game, for the classy Rodriguez.

Tottenham now go to Lokomotiv Plovdiv on Thursday in Europa League qualifying at 5pm, before a trip to Southampton at midday on Sunday.

Everton host Salford City in the Carabao Cup second round on Wednesday evening, live on Sky Sports Football at 8.15pm, and then host West Brom at 12.30pm on Saturday in the Premier League.