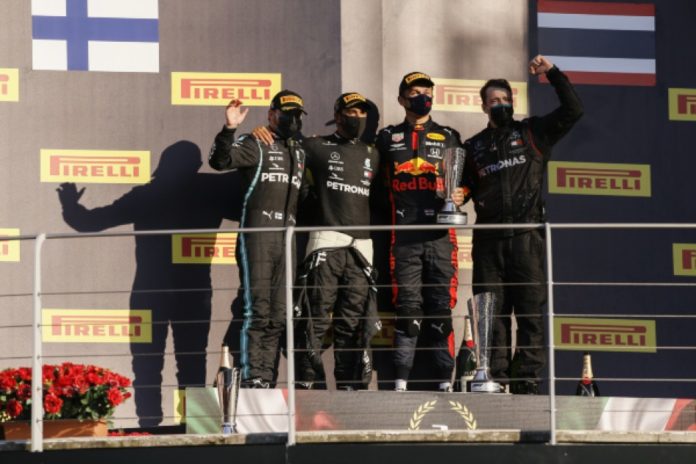 Hamilton didn’t have it all his own way, however, and at the start he was beaten off the line by Bottas who surged into an early lead.

Further back though there was trouble for Max Verstappen. The Red Bull driver reported a power unit issue on his laps to the grid and once he lined up in P3 his crew were quickly into action to try to solve the problem.

The issue appeared to have been resolved but after making a great start Verstappen suddenly lost power and dropped back into the pack. There, in Turn 2, Haas’ Romain Grosjean made contact with the AlphaTauri of Pierre Gasly who vaulted over the rear right wheel of Kimi Räikkönen’s Alfa Romeo. The Finn slammed into the back of Verstappen’s Red Bull and the Dutchman was pitched into the gravel where he became beached.

The safety car was released but on the lap six restart, there was more drama as a chain reaction crash involving Alfa’s Antonio Giovinazzi, Haas’ Kevin Magnussen and McLaren’s Carlos Sainz brought out the red flags and the remaining cars funnelled into the pit lane.

After an almost half-hour stoppage the cars reformed on the grid for a standing start, with Bottas ahead of Hamilton, Ferrari’s Charles Leclerc and the second Red Bull of Alex Albon.

When the lights went out Hamilton made a good start passed Bottas to take the lead through Turn 1. Albon, though, got a poor getaway and he fell to seventh as Leclerc held third ahead of Racing Point’s Lance Stroll and Sergio Pérez, and Renault’s Daniel Ricciardo.

Leclerc held onto P3 as bravely as he could, but with his Ferrari down on power compared to his rivals, it wasn’t long before he was passed by, first, Stroll and then by Ricciardo and Albon.

The first round of regulations stops saw the Mercedes drivers both take on hard tyres as they continued to hold the top two positions. Behind them, though, Ricciardo successfully undercut Stroll to steal P3.

Albon then pitted for medium tyres on lap 32 and he was soon outpacing Stroll by over a second a lap. He cut the gap to just 1.1s but on lap 42 the race took another dramatic twist when Stroll crashed out at Arrabbiata 2. The Canadian appeared to suffer a puncture as he entered the high-speed corner and his Racing Point slid off track and hit the barriers hard.

For a second time the race was red-flagged and the remaining cars streamed back to the pit lane to await a third standing start.

When that came, with just a dozen laps remaining, Hamilton got away well, but Bottas was passed by Ricciardo. Albon again had a tricky getaway and lost ground to Pérez in Turn 1. The Red Bull driver was in no mood to give up fourth place, however, and powered past the Mexican around the outside of to retake fourth place.

Bottas was just a quick to exact revenge on Ricciardo and Albon then closed on the Renault driver. On lap 50 The Red Bull man got close enough and under DRS he powered around the outside to Turn 1 to complete the move on the Australian.

Behind him Ricciardo took fourth place, with Pérez fifth. McLaren’s Lando Norris finished sixth ahead of AlphaTauri’s Daniil Kvyat, while Leclerc was eighth for Ferrari. Räikkönen managed to hang to a points finish with ninth place despite incurring a five-second time penalty for a pit lane infringement and the final point on offer went to Vettel who sealed a double points finish for Ferrari at its 1000th grand prix.