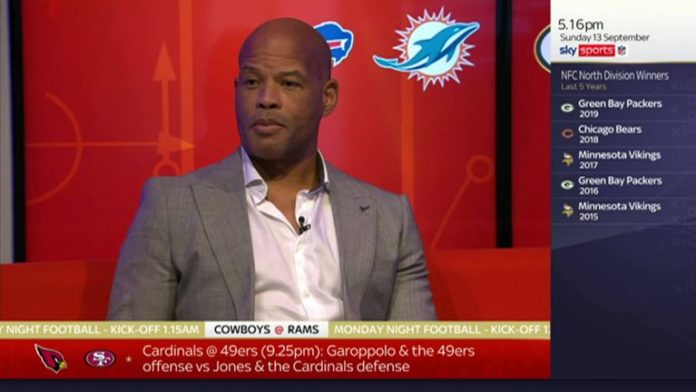 “There is no room for a coat of paint, a publicity exercise – it has to be something valuable,” says Shaun Gayle

Shaun Gayle has called for ‘tangible action’ against social injustice, as the NFL Week One Sunday games featured teams remaining inside and outside the locker rooms.

Teams and players have been widely supported in however they choose to make a stand, with some remaining on the field, some taking a knee, and others choosing to remain in the locker room – a very different landscape to four years ago when Colin Kaepernick was marginalised after his stance.

Gayle was in the Sky Sports NFL Sunday studio alongside former NFL coach Rob Ryan and another Super Bowl winner Cliff Avril, as the league prepared to follow Thursday’s opening night win for the Kansas City Chiefs with Sunday’s 13 games.

“The players are sceptical and it’s understandable why,” he said.

“You have to understand this systemic racism, this police brutality. It permeates society and life in the US and here.

“When it comes down to addressing it, there is no room for a coat of paint, a publicity exercise. It has to be something valuable.

“Some tangible action to prove to those people being affected that something is going to take place.”

‘Lift Every Voice and Sing’ – often referred to as the Black national anthem – was played before all of the games while the playing of ‘Star Spangled Banner’ followed just before kick-off.

On Thursday, the Houston Texans remained off the field for both anthems, while the Chiefs remained on the field, and it was a similar story on Sunday as the players exercised their right to make a stand.

BREAKING NEWS: The@MiamiDolphins players will stay inside for both national anthems. They express their discontentment with what they call “fluff and empty gestures” by the @NFL pic.twitter.com/ghUktHhPt9

Just before kick off on the same day, Miami Dolphins’ strongly-worded video saw the players call on ‘owners with influence’ to flex their political power as well as their own reluctance to play their part in a ‘publicity parade.’

As such, the Dolphins remained in the locker room before their game against New England, while in Washington the home team knelt for the anthem on the field and their opponents Philadelphia left the field.

Seattle and Atlanta both took a knee at Mercedes-Benz Stadium while Jacksonville released a statement that was similar to many of the other teams that opted to stay off the field, saying they ‘understood not everyone will agree with our position and demonstration… we hope that all will seek to understand the reason for it.’

At the same game, the Indianapolis Colts stood on the goal-line for the anthem where head coach Frank Reich took a knee with a statement by the franchise reading.

“To be clear, we were not protesting the flag, the anthem, or the men and women who wear the uniform.

“The timing of this action is meant to highlight that the presence, power, and oppression of racism remains inconsistent with the unity and freedoms of what it means to be an American.”

While making a stand in public will raise awareness, Gayle says the players want to see more.

“There has to be more, believe me this has gone on for quite a long time. There is protest, there is demonstration but we end up back in the same place until we start to address the specific issues.

“Like in police brutality, we talk about good police vs bad police – a good police officer is one who won’t allow crime to take place, even if it’s his partner hurting someone or filing a report to report that individual

“These are the types of steps that need to be take for the change to take place.”

Following the death of George Floyd in police custody and the shooting of Jacob Blake, the NFL had used the off-season to admit their mistakes of the past, with players encouraged to use their voice and peacefully protest.

Floyd’s family were in attendance in Minnesota as the Vikings took on the Green Bay Packers. The Packers remained in the locker room during the pre-game anthems while several members of the Vikings took a knee.

On Friday, New Orleans players released their own video focusing on the black women who have been the subject of racism and sexism.

A host of big-name players led the off-season call for change that included a powerful video from the players that called on the league to ‘condemn racism and a systemic oppression of black people, admit wrong in silencing our players from peacefully protesting, believe black lives matter.’

Endzones featured the words ‘End Racism’ and ‘It Takes All of Us’, while the players’ helmets featured the names of victims of racism or police brutality, social justice leaders or one of four phrases as part of the Inspire Change initiative.

That initiative is being driven by the players and former Seattle defensive end Avril, speaking via video link believes that is where real change can happen.

“It goes back to a few years ago when Kaep and Michael Bennett were taking a knee or sitting. It was never about the flag, or the military,” he told Sky Sports.

“It was about injustice, it was about police brutality and a lot of people still don’t want to face those facts and see where people are coming from and that is unfortunate.

“It’s getting some action behind it, using your off days and teaching the kids in the community, bridging the gap between the police officers and the community – all these things are very much needed.

“Understanding that doing your research, understanding your history and presenting it to the world in a way that everyone can have something to follow and replicate.”

Coverage of Week One in the NFL continues on Monday night with the final two games, starting with Pittsburgh @ New York Giants from mignight on Sky Sports NFL