Home Sport Warne: Punch in the guts for Australia 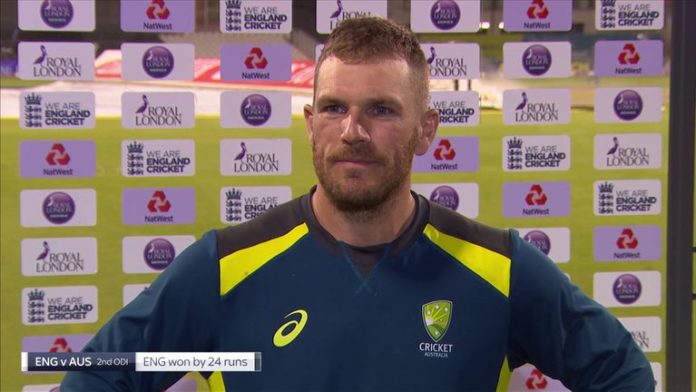 Australia captain Aaron Finch: “I think at times we might not be 100 per cent committed to our plans, we may overplay the situation in our head, so we have to get better at that”

Shane Warne says Australia suffered a “a real punch in the guts” as a dramatic collapse saw the tourists tumble from a dominant position to lose the second ODI to England at Emirates Old Trafford.

Australia were cruising at 144-2 chasing 232 to wrap up a series win with a game to spare, only to be bowled out for 207, including losing four wickets for three runs in 21 balls.

Australia and England will now meet in a series decider on Wednesday, live on Sky Sports Cricket from 12.30pm, after Eoin Morgan’s men levelled proceedings with a 24-run victory.

“Australia hadn’t played cricket for quite a long time so you sort of excuse them [that collapse] in the first T20, even though it cost them that series,” Warne told Sky Sports.

“They have been pretty good since then but this will be a real punch in the guts for Australia. They pride themselves on getting over the line in those sorts of games and doing the basics well.

“They didn’t do that – they weren’t good enough, with Aaron Finch the only batsman to really show any touch. It’s 1-1 ahead of the last day of the international summer. Who writes these scripts?”

Australia captain Finch – who top-scored for his side with 73 and shared a third-wicket partnership of 107 with Marnus Labuschagne (48) before being bowled by Chris Woakes (3-32) amid the chaos – said: “I’m very disappointed. There is no excuse for that collapse.

“Our guys will have their own plans but I think at times we might not be 100 per cent committed to our plans, at times we may overplay the situation in our head, so we have to get better at that.”

Asked if he was pleased with his innings. Finch said: ‘Not really. When you have an opportunity to get the team home and you don’t it is disappointing.

“We knew it was always going to be tough for new batters to start on a wicket like that.

“England squeezed, bowled really good lengths and it was hard to take them on down the ground and hit boundaries in that middle period.”

I would be careful not to criticise Australia’s batting too much. I think the pitch was really hard to bat on, especially when the lights came on, and England bowled beautifully.

Australia would have been chasing a much lower total had Tom Curran (37 off 39 balls) and Adil Rashid (35no off 26) not blazed 76 for England’s ninth wicket to lift them from 149-8.

Finch said: “I think we probably bowled a touch wide and gave them a few opportunities to free their arms, so that is disappointing.

“In future, you might look to bowl straighter and drag your length back – but they are good batters“

Warne added: “Australia got it a bit wrong. They tried to go for wickets and didn’t sum up conditions and think ‘hard length at the stumps is tough for the batsmen so it should be the same for the tail’. They got a bit greedy trying to knock them over.”

Watch the third ODI between England and Australia on Sky Sports Cricket from 12.30pm on Wednesday.