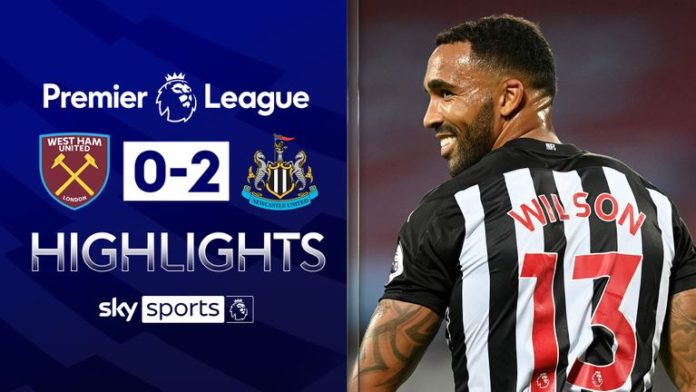 Watch Newcastle vs Brighton on Sunday. Coverage begins on Sky Sports Premier League at 1pm and Main Event at 2pm; kick is 2pm

Wilson, a £20m signing from Bournemouth, scored the first goal of the Magpies’ 2-0 win at the London Stadium in their opening game of the Premier League season.

Carroll is yet to score in 22 appearances since he returned to his hometown club from the Hammers last summer, but Bruce praised the 31-year-old’s fitness levels and insisted he deserved his place in the starting line-up.

“Andy has not missed a day in training, or a minute, since we came back from lockdown,” Bruce said ahead of Newcastle’s Carabao Cup second-round game at home to Blackburn on Tuesday.

“As soon as he walked through the door again, we thought, ‘he looks lean and fit’, and keeping him fit, that is the key to it.

“He scored a couple of times in pre-season, did everything we asked of him, so he deserved his chance.

“We only had him, to be fair, up front and he took his chance, and I think he deserved to play. Then obviously with the arrival of Callum, I just know being an ex-centre-half that to play against those two is going to be difficult.”

Despite getting off to a wining start – with Wilson’s fellow debutant Jeff Hendrick also scoring and left-back Jamal Lewis impressing – Bruce is understandably keen not to get too carried away over one result.

“There’s nothing better for anyone than to go away from home and win, especially in the Premier League because we know how difficult it is,” he added.

“But it wasn’t just the victory which pleased me, it was the way we went about it too, with three new faces in the squad who looked as if they’d been here for years, never mind a week, so that pleased me.

“All three of them had wonderful debuts, which also helps the situation.

“We’ve had a decent start, but we’re not going to get too carried away over one result because there’s still a long, long way to go.”

Ahead of the new season, we look at Newcastle’s strengths, weaknesses and what the targets should be for Steve Bruce’s side…

As for their Carabao Cup tie against Blackburn, Bruce confirmed that another summer signing, Ryan Fraser, will start at St James’ Park, with Ciaran Clark also set to feature after a lengthy spell out with an ankle injury.

Bruce said: “Ryan Fraser will make his debut. Ciaran Clark will play who hasn’t played for a long time and there’s some players who need a game but the squad is big enough to make those changes and let’s hope we can get through to the next round.

“We’ll take it seriously but the competition this year is condensed by seven weeks so we’ll play more games. I have a squad and I will make changes but when I look at the strength we have I still expect us to try and get through.”

The winners will play away to Morecambe or Oldham in the third round of the competition.