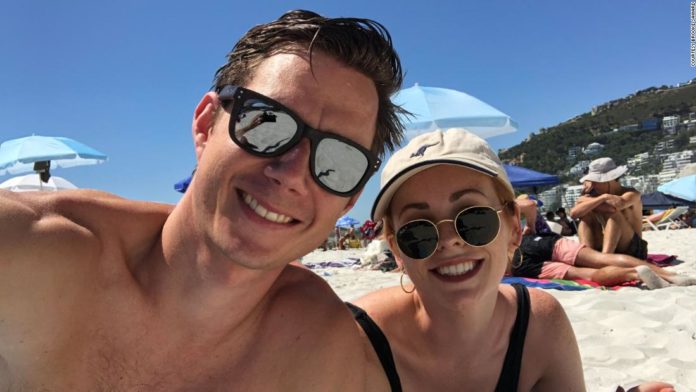 (CNN) — No job, no visa, no health care — and barred from returning home. This powder keg of misfortunes is the current reality for tens of thousands of expats who hold the world’s ninth most powerful passport.

While situations differ, one point remains the same — Australians abroad feel abandoned by their government during the coronavirus pandemic.

Sunday marked two months since Prime Minister Scott Morrison introduced a cap of just under 4,000 international arrivals per week. He made the move in response to the country’s second coronavirus wave, which was sparked by a hotel quarantine security scandal.

The cap has resulted in a barrage and backlog of canceled flights, with ticket prices skyrocketing.

The Department of Foreign Affairs and Trade (DFAT) says at least 25,000 Australians, many of who are financially and medically vulnerable, have registered their need to come home since July. However, the Board of Airline Representatives of Australia estimates the true number of those stranded is closer to 100,000.

Prior to the pandemic, the Aussie accent echoed across the world, with over one million Australians living and working overseas at any given time.

Before the cap was put in place, Australia already had some of the world’s strictest coronavirus travel measures. Since March, hotel quarantine has been mandated, foreign tourists have been barred from entry and citizens banned from leaving.

Those trying to return home now are Australian citizens who left the country prior to the pandemic, not holiday makers.

“You should have come home”

Stuck in Abu Dhabi, Stephen Spencer is now struggling to return to Australia with his family.

Contrast that to the past two months, where the cap restricted entry to just over 30,000 Australian citizens. It’s the argument of critics, including Trade Minister Simon Birmingham, that citizens should have returned in the early stages of the pandemic.

“If you wanted to come back you should have already come back in most circumstances,” said Birmingham.

A number of Australians currently stranded abroad told CNN that while the government did urge citizens to return home in March, it was a message aimed at short term travelers.

Those who had a permanent job, home and savings were advised by their consulates to stay put. No one in March could predict the trajectory the pandemic would take, nor the impact it would have on their lives. Six months on, many still have a secure income and home, while others have had their lives crumble apart.

For Stephen Spencer in Abu Dhabi, returning to Australia in March would’ve meant quitting his job, uprooting his kids’ education and abandoning his house — with nothing secured on the other side. Spencer and his wife Kate chose the most stable option for their kids, which was to ride it out in Abu Dhabi.

Several months later, Spencer lost his job and is now struggling to get his family home. As the sponsor of his wife and teenagers, once he cancels their visas, an act he must do before they leave, they will have just 30 days to exit the country.

“If we are unable to get on a flight to Australia, we are effectively living as refugees, with no legal right to remain in the UAE and a home country that will not allow us to return,” he explained. “I cannot believe how quickly the Australian government abandoned its citizens overseas.”

It’s a story retold by many of those stranded.

Sarah Tasneem was living in Canada when the invisible enemy caused the world to go into hibernation. She had a stable job and was undergoing the process of permanent residency. However, her application was canceled by the Canadian government in June, resulting in the loss of employment. She is now running out of money and is unable to work while she fights to get home.

“I am worried I will eventually face deportation,” Tasneem said. “I am running out of time.”

She has been advised by her embassy to take money out of her retirement fund. It was an option made available to all Australians earlier in the year, however, is not one she feels comfortable with.

Emily Altamirano and her uncle, who contracted the coronavirus.

For others, it was not stability that caused them to stay abroad, but rather a lack of options.

For Emily Altamirano, the flight caps are just the latest barrier in a six-month bid to return home. When international borders started closing, Altamirano was visiting family in Peru.

Commercial flights from the region to Australia stopped, and she was unable to board a repatriation flight after her uncle contracted the coronavirus. Following his recovery, she’s since been trying to fly to Australia via the United States, however, has been unsuccessful in securing a ticket due to the caps.

“It’s like they [the government] have forgotten us,” said Altamirano.

Carmelina Ciampa also feels like she’s been left to fend for herself. Late last year, she traveled with her youngest son to Italy to care for her mother, Rosa, who had been diagnosed with cancer. Her husband and eldest son stayed in Australia.

Refusing to leave her mother on her death bed, Ciampa stayed in Italy through the beginning of the pandemic. Last month, her mother passed away and Ciampa has since been unable to reunite her family due to the flight cap.

“My son asked me to try to get to Australia by boat, and I actually looked at whether I could travel by cargo ship,” Ciampa described of her desperation to return home.

Carmelina Ciampa, pictured with her youngest son, in Italy. Her husband and eldest son are in Australia.

The price tag of returning home

For some, returning to Australia means leaving loved ones.

Brooke Saward, an Australian expat in South Africa, says she saw the Australian passport as akin to holding a four-leaf clover. But now, the kangaroo and emu coat of arms is proving to be a curse.

With work drying up and an overstayed visa, she’s trying to return home from Cape Town. Her departure will mean leaving her South African boyfriend, unsure when she will see him again.

“It came down to a decision of where I need to be, not where I want to be,” Saward explained.

“This constant unknown feeling of when you can get home to your family, when you can be earning an income again, when you can have health care… is enough to keep you up at night, every night.”

While the limbo of love is an intangible loss, the price tag of returning home is very tangible.

For Saward, rates for flights home start from over $12,000 AUD (about US$8,650), 12 times that of a normal one-way ticket from Johannesburg to Sydney.

With no commercial flights available, she booked a chartered flight, which was consequently denied by the Australian government. Simply put, too many Australian citizens expressed a need to come home from South Africa.

Running out of options, Saward looked at flying to New Zealand and chartering a private jet to Australia. This option was approved by the Australian government, however New Zealand, which also has strict travel measures, declined her transit visa.

It’s one of many examples that have led stranded Australians to believe the wealthier are being prioritized over the vulnerable.

At the beginning of September, the Australian government announced a one-off loan of $2,000 AUD for individuals stranded abroad to book an economy-class ticket. Not only was it a drop in the water for the travel expenses of many unemployed expats, but also fails to meet the mark of the current reality.

Many of those stranded have told CNN that it’s near impossible to currently get home on an economy class ticket. Airlines have been prioritizing business class tickets, due to the financial viability of flying just around 20 passengers. Bear in mind, on top of the business class price tag comes the additional $3,000 AUD mandatory hotel quarantine fee upon arrival.

Since the pandemic began, Qatar Airways has been at the forefront of repatriating Australians, after Australia’s national airline, Qantas, halted all international flights.

Last week, Qatar Airways called on the Australian government to increase the caps, arguing that it is not financially viable for the airline to continue operating at just under 90% empty.

“Too little, too late”

Commercial flights flying into Australia these days are nearly empty due to the goverment’s strict arrival caps.

With the caps currently in place until October 24, Prime Minister Morrison has acknowledged the need to increase them but is yet to provide a path forward. Health Minister Greg Hunt said on Sunday that he wants to “ensure that every Australian that wants to come home is home by Christmas”. It’s a promise that many of those stranded see as a matter of too little too late.

Carol Thompson says her family is shattered, after several months of attempting to get her 21-year-old son, who is now suffering severe depression, home from the United Kingdom.

“I am desperate for my son to get home,” she said.

Saward reiterated Thompson’s pressures, saying, “Living in a global pandemic is enough to challenge a person’s mental health, let alone being stranded in a foreign country.”

Meanwhile, a now jammed backlog of flights has created a long path forward for expats like Carol Schenk.

“I’m aware of flights out of Dubai already getting canceled for January,” said Schenk, who is currently stuck in Oman. “It leaves little to no hope of us returning home any time soon.”

CNN has requested comment from Morrison and other government officials. However, at the time of publishing they have not responded.