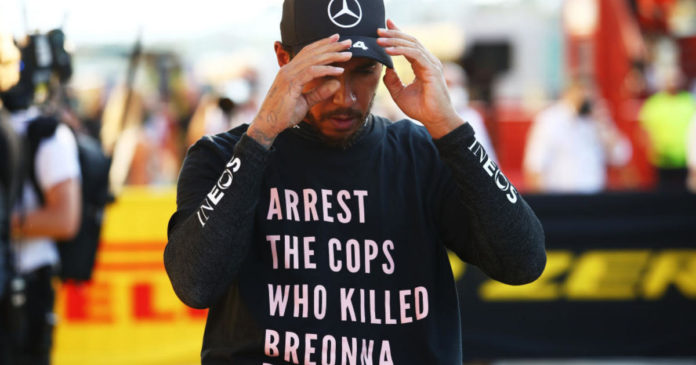 Hamilton, a  six-time F1 Mercedes champion, wore a T-shirt with the phrase “Arrest The Cops Who Killed Breonna Taylor” on the front, and a picture of Taylor captioned with “Say Her Name” on the back. He also wore the shirt on the winner’s podium, saying “Justice For Breonna Taylor” after claiming Sunday’s trophy.

Taylor, a Black emergency technician was shot and killed in her Louisville home by police executing a no-knock warrant on March 13. Calling to arrest the officers involved in the shooting has become a popular rallying cry of the Black Lives Matter movement.

The FIA spokesperson said the matter was “under active consideration” and that the authority is not a political organization. However, it is unclear what rule Hamilton will be investigated for breaking.

The FIA did not immediately respond to CBS News’ request for comment.

F1 has previously allowed drivers to support both political movements and anti-racism. In July, F1 created the #WeRaceAsOne initiative to address inequality and racism. All 20 drivers work Black Lives Matter shirts, including Hamilton, who continued to wear the shirt before every race.

Hamilton isn’t the only professional athlete showing support for the Black Lives Matter movement. During the U.S open, champion Naomi Osaka wore seven face masks emblazoned with the names of police brutality victims, including Taylor. On Sunday, several NFL teams also opened their seasons with messages of solidarity, with players kneeling or remaining in the locker during the National Anthem.

“I’ve been wanting to bring awareness to the fact there are people being killed on the street,” said Hamilton in a post-race news conference. “And someone was killed in her own house and they were in the wrong house and those guys are still walking free.”