Home Sport ‘Nobody wavering’ from Joshua vs Fury 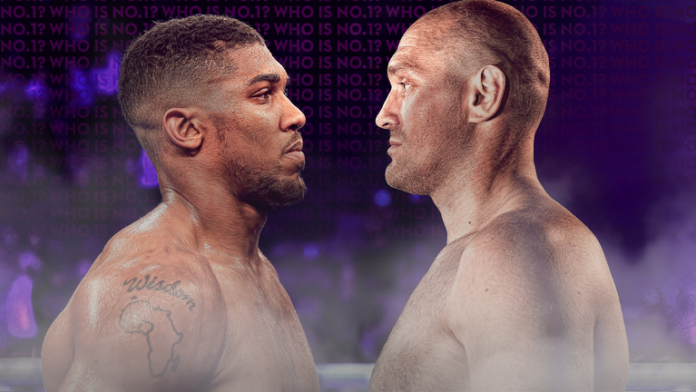 “What will the economics look like? We need to see how things change. But it’s as big a fight as anything I’ve seen in the sport”

Anthony Joshua and Tyson Fury’s plan to collide next year is still on despite problems caused by the coronavirus pandemic because there is a “gravitation to bring the titles together”, says Top Rank president Todd duBoef.

IBF, WBA and WBO champion Joshua and WBC titleholder Fury have agreed financial terms on two fights in 2021 to decide an undisputed ruler of the heavyweight division but must first come through defences which are yet to be finalised.

DuBoef of Top Rank, Fury’s US-based promoters, told Sky Sports: “There is a gravitation to bring the titles together, and that would be Joshua and Fury. Obviously we would have loved to do that before the end of this year, but for the pandemic.

“Both guys have great personalities, they can fight, and it is overdue. Let’s get it done.

“It would be the biggest fight in the history of the UK, for sure. In order to be a really big fight you have to have a large gate; for example Floyd Mayweather vs Manny Pacquiao did $70m at the gate. I don’t know what the world will look like in spring 2021.

“What will the economics look like? We need to see how things change.

“But it’s as big a fight as anything I’ve seen in the sport.”

Joshua is next expected to put his titles up for grabs against Kubrat Pulev, who is also promoted by Top Rank, in December.

Fury’s priority is a contracted trilogy fight with Deontay Wilder, who he emphatically stopped earlier this year.

“We’re looking at December 19, obviously Vegas is one of the places which is a high priority to do it in,” duBoef said. “That’s where we are.

“We have been flexible and fluid in the entertainment and sports business. It is important to be patient, play it out, make sure it happens at the right time.

“That looks like a nice date in December to target it.

“It is a fair date to earmark, to give us time to put everything together.

“Everybody has been frustrated, not just Fury, Wilder, Joshua or Pulev. All the athletes have.

“I speak to PBC [who advise Wilder] – we are all looking at that date.

“Nobody wants a false start. Deontay and Tyson have such big personalities – get them riled up and you can’t stop the train rolling.

“Fury has blossomed into a wonderful heavyweight but Wilder has dynamite in both hands. You can never blink or take him lightly because, in one second, it can be over.”

DuBoef added about Vegas, where Fury’s most recent three fights have been: “Vegas still has the bells and whistles but unfortunately doesn’t have the people there to play with them. That is a frustration.