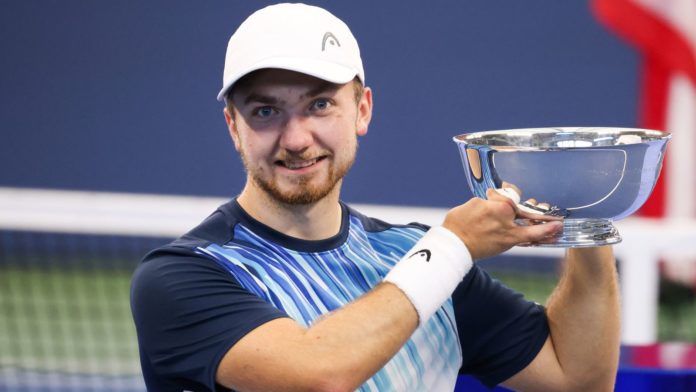 “Playing in my first Grand Slam, finally getting the chance to be here, it’s crazy that I’m the US Open Champion – I’m just so happy”

Sam Schroder has now joined an illustrious Grand Slam list of individuals who all arrived as a wild card and left it as a champion.

Goran Ivanisevic and Kim Clijsters are two others who know exactly what that feels like, and for 20-year-old Schroder, the feat was made even more impressive as the 2020 US Open was the first major of his career.

After winning two out of three of his round-robin matches in the quads division of the wheelchair tennis draw, he set up a meeting with world No 1, Dylan Alcott in the final.

Then, after three thrilling sets, he claimed the first win of his career over the Australian, 7-6 (7-5) 0-6 6-4, signalling he is one to watch when it comes to future Slams.

“It’s incredible! I still can’t really believe it actually, I feel like I’m in a dream right now,” he told Sky Sports.

“I’ve played a lot against the top three, I’ve lost to them, I’ve also won against them all now. Two years ago I wouldn’t be able to say that, so I think there’s a little bit of a change coming.

“Playing in my first Grand Slam, finally getting the chance to be here, it’s crazy that I’m the US Open champion – I’m just so happy.”

After this victory, while Schroder is still waiting to hear if he will be granted a wild card for the French Open, he is planning to take a well-earned rest before heading back to training.

Once he returns to training, his aim is to use this victory as a platform to continue to rise up the rankings and make his mark on the division.

For those who follow the Tour, his success on such a big stage probably has come as no surprise. Schroder already had big wins over the years against world No 2 Andy Lapthorne and world No 3 David Wagner at Tour events, before he made his Grand Slam debut in New York.

What became clear on court inside the Louis Armstrong Stadium on Sunday, was the mental fortitude the Dutch player has when it comes to closing out matches.

“I always keep fighting and I don’t give up on any point even if it seems impossible to win,” he said.

“Having had cancer I know what it is to keep fighting for everything, and I think that fight in me keeps me going through matches.

“I know I have the power in me to take these high-level matches now. It gives me the faith that I’ll be able to find a way to beat all of them more now.”

Schroder, who is part of the next generation of talent coming through in the quads division, is also grateful to those in the sport who have come before him. He is grateful for the legacy created by players such as Esther Vergeer, Jiske Griffioen and more recently Diede de Groot in the Netherlands.

“The Dutch women have been on such a crazy winning streak for the last however many years, for like as long as wheelchair tennis has existed really, and I’ve been able to see that and watch that and learn from that,” he said.

“So I think it’s great for Dutch tennis that Niels (Vink) and I are really stepping up our game as well and bringing success to the quads division as well now.”

Naomi Osaka: Leading the way on and off court

This is a story about more than just tennis, with Naomi Osaka using her platform to promote Black Lives Matter and honour victims of violence and brutality.

And while not official yet, talk is that 2021 will see an increase in the size of the quad division draw, currently limited to four players, at Flushing Meadows.

Not only something which Schroder sees as a huge leap forward for the division, if it were to happen, but also something which would carry on the reputation the US Open has for always looking to be innovative and grow the game of wheelchair tennis on one of the world’s biggest stages.

“I think if it does happen it will improve everyone’s game, it will give players more chances to play against the top guys and in these higher-ranked tournaments because you know four people is a really exclusive group,” he added.

“But I think if you grew to maybe six or eight or however many players are able to come next time, it’s ultimately going to be better for the quad division and the sport.

“It would be a great improvement and who knows maybe somebody you don’t expect would be able to win a Grand Slam like me here this year.”