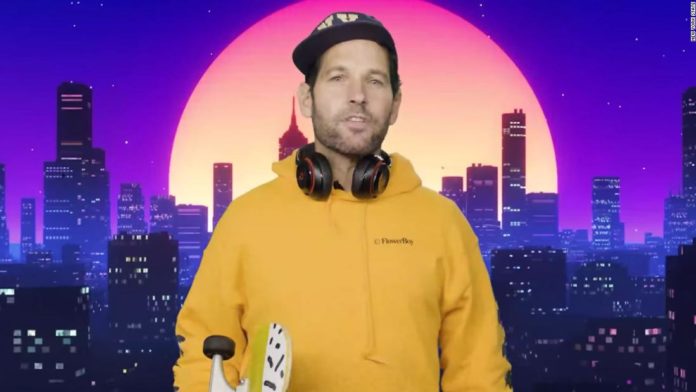 The 51-year-old actor filmed a public service announcement at the behest of New York Gov. Andrew Cuomo as part of the “Mask Up, America” campaign.
In it, Rudd dons a hoodie, an NYC cap and some headphones as he carries a skateboard and speaks the language of the younger generation.
Says Rudd, “I was talking on the iPhone with my homie, Gov. Cuomo, and he’s just going off about how us millennials need to wear masks because, get this, apparently a lot of Covid is transmitted by us millennials.”
“So Cuomes asks me, he’s like, ‘Paul, you’ve got to help. What are you, like, 26?'” Rudd says in the video. “And I didn’t correct him. So, fam, let’s real-talk. Masks, they’re totally beast. So, slide that into your DMs and Twitch it.”
“Hot Ones” web series host Sean Evans makes a cameo, in a nod to Rudd’s appearance on an episode.
“This nation is still battling the Covid-19 pandemic and young people are not immune from it,” Cuomo said in a statement. “We all need to do our part and wear a mask. Thanks to Paul Rudd for helping us spread this crucial message and reach young people like him.”
It’s the latest in a series of ads for the mask campaign, which has featured celebs including Billy Crystal and Robert De Niro.
The video was produced in partnership with Rudd and Evans in coordination with Jane Rosenthal, producer and chief executive officer of Tribeca Enterprises.